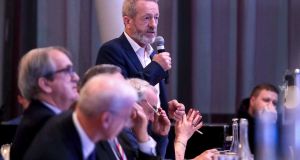 Seán Kelly: “I think debarring them from the next competition, which in this case is the national league, would certainly put manners on them. Photograph: Laszlo Geczo/Inpho

Former GAA president Seán Kelly has suggested that teams found to have breached the intercounty training ban should be debarred from the upcoming Allianz League.

The GAA has set up a subcommittee to look into instances where breaches of the current training shutdown may have occurred.

Cork football manager Ronan McCarthy confirmed his players were “team building” in Youghal last weekend, though he maintained they followed all Covid protocols.

Down senior players were also spotted at the Abbey CBS grounds though according to county chairman John Devaney it was a one-off meeting to distribute training programmes.

At least two more unnamed counties have also been pulled in for questioning and it remains to be seen what action, if any, GAA authorities take.

In January 5th correspondence to county secretaries, GAA director general Tom Ryan advised that rule breaches would be dealt with under the ‘Misconduct considered to have discredited the association’ rule.

The accompanying penalty is ‘a minimum of eight weeks’ suspension for a team or unit while ‘a fine, disqualification and expulsion from the Association may also be considered’.

Kelly said his personal feeling is that rule breaches aren’t widespread but suggested that where clear evidence is obtained the punishment should be decisive.

“It should be easy enough to monitor whether teams are training or not, it’s not a small operation convening a group of players to train,” said Kelly. “I think debarring them from the next competition, which in this case is the national league, would certainly put manners on them.

“Any team doing that is trying to get an edge over everyone else, trying to take advantage and displaying a very poor spirit.

“I have to say, I doubt if the families of players and of management and of county board members would find it acceptable to be so irresponsible. I can’t believe it’s a widespread thing. It may be a case that counties had plans in place for January 1st and then when the new year came around the situation deteriorated very quickly.

“At the same time, it’s no harm to have a carrot and stick approach with this and the stick should be that if clear evidence of a breach is there then it’s debarment from the competition. That’ll sort it out pretty quickly.”

Kelly, who led the GAA between 2003 and 2006 and memorably presided over the Rule 42 amendment, suggested last August that the Government should provide extra funding to allow the delayed championships to take place.

A €15 million grant was ultimately provided for running the winter games and the GAA subsequently confirmed it would be lobbying for more funding for 2021, given the anticipated crowd restrictions which will affect gate receipts.

“I think it may well be required,” said Kelly of additional funding. “If there’s no income coming in then obviously the GAA is affected just as much as any business would be. I would think that some sort of subvention to tide them over would be very welcome.

“The big thing now is that there is light at the end of the tunnel. More than likely this will be the last year of these sorts of measures with vaccines currently being rolled out and I think acts of generosity right now will be remembered and will mean a lot in time to come.”