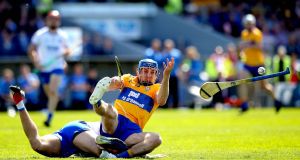 Dispatches from the Munster Hurling Championship, Version 2019. With Tipperary storming Páirc Uí Chaoimh and Clare getting the job done in Walsh Park, more teams have already lost on their home patch than in the whole of last year’s competition. Liam Sheedy has his first Munster win in a decade, Cork have their first defeat in the province since 2016, Waterford have now gone three years without a win in the competition. The summer is a couple of days old and already it has plenty to say for itself.

Tipp’s 2-28 to 1-24 win over Cork got Sheedy’s second stint off to much the same start as his first go-round did 11 years ago. A trip to Cork, a convincing win, a solid first step towards righting the ship. Every Tipperary player from wing-back to corner-forward scored at least a point; Cork, by contrast, needed Patrick Horgan to supply over half of their output.

If the Tipp starting line-up had raised a few eyebrows for its lack of fresh faces, Sheedy could be delighted in what his older hands supplied. All of Tipp’s war-time consiglieres showed up here – Seamie Callanan helped himself to 1-4, John O’Dwyer threw in a scintillating 0-7 from play and also picked the pass of the day to send John McGrath in for their second goal. While the openness of the game suited them, it should have suited Cork too. Tipp were just better.

“Unless you get a performance down here you won’t win,” said Sheedy afterwards. “I thought we found a good level – we started very well and gave ourselves a few points of a cushion but discipline in the first half probably cost us. We gave them eight points from placed balls and that was a bit of a downer, but I just felt psychologically to go in a point up we knew we had a small little bit of a wind at our backs in the second half, and it was a help. We got a great start to the second half and we got to three or four, and built on that.

“We were coming down to play the team that are going for three in a row in Munster but overall today was a really good performance. There was a lot to like about display but 11 years ago here you take a bit of a break, you were into a Munster final and you could get four or five weeks off. For us this evening we have just got to roll back again and get ready for what’s coming next week, which is Waterford into Semple Stadium which is a massive match again. It’s great but at the end of the day it’s two points.”

Cork were slightly thrown off their stride by the late withdrawal of Bill Cooper to a back injury. But even allowing for it, they had to be annoyed with the way they fell off the pace after the second Tipp goal. With Horgan in such smooth working order and Seamus Harnedy getting in for 1-2, they had the makings of a winning total. But conceding 2-28 isn’t going to make for a long life in the championship.

“Bill is a fantastic player, a leader of the team really – he’s one of the senior members of the team so it was a massive loss to us,” said John Meyler afterwards. “But we just had to reorganise, and put Luke [Meade] back into midfield. He played quite well I thought but we lost that at half-forward and we lost Bill at midfield. But that’s not an excuse, really, you have to be able to lose one or two players through injury or whatever, and that was it.”

In Waterford, the home side weren’t able to capitalise on bringing the Munster championship to Walsh Park for the first time since 1996, eventually running out of road against Clare in a 1-20 to 0-22 defeat. Paraic Fanning’s team went into injury-time five points down and managed to bring it back to one in a rip-roaring endgame. But in the end, John Conlon’s early goal for Clare was a thumb on the scale that Waterford couldn’t outweigh.

“Yeah, it was a really good boost and maybe we had the opportunities to get one or two more,” said Donal Moloney. “But then again, Waterford missed one at the other end as well. It was a really good start. We knew from the way the lads were this morning that the mindset was really positive, really good.

“But it starts from scratch again now. Today counts for nothing when Tipp come to Ennis [in three weeks]. It will be another cliff-hanger against Tipperary.”

Stakes high for Guardiola and City as Real Madrid come to town 06:00
Geordan Murphy navigating Leicester Tigers through the Covid-19 storm 06:00
Andy Farrell admits Ireland net may need to be spread wide in the autumn 06:00
Brain as well as brawn on Sexton’s lockdown menu 06:00
The game they loved so well: How cricket united Hume, McGuinness and McCann 06:00