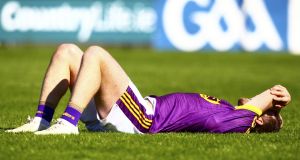 Wexford’s Ben Brosnan dejected at the end of the game. Photograph: Ken Sutton/Inpho

Wexford had what looked like certain victory snatched from their grasp when Louth turned in a storming finish that produced six unanswered points in the closing seven minutes, and an eventual five point victory, in a pulsating Leinster senior football championship preliminary round game at Innovate Wexford Park.

The hosts appeared to be on their way to victory when leading 1-14 to 0-16 with less than one minute of normal time remaining. But then corner-forward Andy McDonnell kicked the levelling point with less than one minute remaining, while in the remaining five minutes of additional time it was Louth who stormed all over a tiring homeside, adding a further five points and setting up a clash against reigning All-Ireland champions, Dublin.

For so long it looked as if Wexford were about to continue the exploits of the Division Four sides over the weekend, while Louth - who just missed out on promotion to Division Three - put their supporters through the wringer, as they struggled to battle their way into the contest. The manner of their finish topped their earlier sloppy play, but still it must be said that the final scoreline flattered them.

That Louth survived this test with a late scoring flourish was not lost on Manager Wayne Kierans.

“We probably made it a bit harder than we should but credit to Wexford they kept on battling even when we started the second half well going into a two point lead inside five minutes. Earlier in the league we were on the receiving end of narrow defeats but the lads learned a lot from that. It was just as well that we kept within distance of them, even when they had their periods of control. We’re just delighted to get out with the win.

“Last year we lost the opening round, but the lads after a good league campaign put in the effort, and it was that training which showed with the powerful finish. Obviously we now have Dublin to look forward to but that display is something we’ve got to work upon. The victory will help give us momentum, so it’s a boost for Louth football who now have the All-Ireland champions to look forward to.”

Wexford were trying to bounce back from a dreadful league campaign, but in fairness they put in a huge effort.

Manager Paul McLoughlin had expressed his disappointment at the lack of preparation time for the game, with club championships having taken over the month of April.

“Certainly we could have done with more preparation time. I had the squad for just over two weeks since the league, not sufficient time for preparation for a game like this. Certainly the players put in a huge effort but tired limbs caught up in the closing minutes. While one would question a few decisions which went against us, particularly late on, I felt that we had sufficient possession to have put the game away. There’s certainly things to work on for the qualifiers,” he said.

Just 17 minutes into the opening half the sides were deadlocked at 0-3 each, with little separating the sides as they continued to trade scores, with Jonathan Bealin the main marksman for the homeside, while midfielder James Califf kicked over some fine points for Louth.

Three minutes before the break, Louth came close to breaking the deadlock when Conal McKeever, having been put through by midfielder Tommy Durkin, saw his goal attempt brilliantly saved by Matt Doyle with Eoin Porter clearing the breaking ball off the line, but it was Wexford who went in leading 0-7 to 0-6 at the interval.

The second half saw Louth resume with an increased tempo to their game, leading to corner-forward Declan Byrne kicking over two superb points. But Wexford managed to regain the initiative, responding with points through Bealin, Glen Malone and Martin O’Connor to lead 0-10 to 0-8.

With the sides deadlocked at 0-11 each, Wexford keeper Matt Doyle produced another superb save from Jim McEneaney at the expense of a fruitless 45. After 42 minutes, Wexford’s Eoghan Nolan was fouled as he bore down on goal leaving Kevin O’Grady to blast the resulting penalty into the net.

As Louth tried to peg Wexford back, the homeside still led 1-14 to 0-16 as the game moved into the final minute of normal time, when Andy McDonnell point levelled the sides. Things now began to go Louth’s way as Wexford visibly tired, with sub Ryan Burns pointing them in front in the opening minute of the five minutes additional time. They followed with a string of unanswered points through Ciaran Downey, William Woods, Tommy Durnin and a Ryan Burns 45 to clinch a dramatic late victory.