Tipperary rise again to leave Cork floundering in their wake 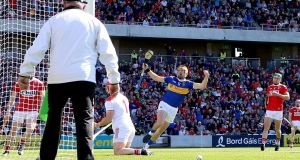 Redemption, as Liam Sheedy cautiously remarked, takes more than a day but Sunday in Páirc Uí Chaoimh was as uplifting a start as any penitent could wish for.

Tipperary, dejected last year after failing to emerge from the province or even win a single match, had stuttered through the league and came into the championship, their skies dark with questions over appetite, energy and anything else that a team with ambition requires.

The shake-out in Cork on a gloriously sunny afternoon, straight from the annals of the counties’ championship rivalry, was riveting entertainment leading to a super start for Tipp, now up and running after an away fixture against the champions of the last two years, and a worrying reality check for a Cork side, due to visit All-Ireland winners Limerick in seven days.

Questions had been asked of Tipperary’s pace and ability to stay with Cork’s high tempo but their movement was clever and their play making precise and assured. Most strikingly their shooting was almost flawless.

The bravura display was facilitated in some ways by hesitant defending. As early as the third minute the bell tolled for the Cork when Séamus Callanan found himself unaccompanied in an acre of space. He strode in and rapped the ball to the net to give Tipperary a 1-0 to 0-1 lead and set the tone for the afternoon.

John O’Dwyer had one of those days where he hits his targets with the aplomb of a man machine-gunning clay pigeons and ended with 0-7 from play.

Cork, not helped by losing Bill Cooper to a back injury just before the start, didn’t panic and were helped by some rough and ready defending, enabling Patrick Horgan to showcase his dead-ball acumen, which over the match was 100 per cent for 0-10. It included a free from somewhere around Blackrock and the team came alive with some fine points from play and even led twice by a point around the half-hour mark.

The scoring sequences were like highlights reels, wristy miracles or neat inter-changes like the four-hander that ended in a Horgan point from play or the same player’s deftly-lofted point from the fringe of a ruck.

Tipp resisted before the break and re-established the initiative to lead by a point at half-time, 1-13 to 0-15.

Cork’s defence ultimately frayed. Eoin Cadogan had some good tussles with Callanan but the latter finished with 1-4. Debutant Niall O’Leary earned the praise of his manager John Meyler but John McGrath got the decisive score of the second half when the home defence went walkabout again, allowing O’Dwyer to be picked out by Noel McGrath, alone, all alone, as they say in Tipp and his accurate ball across the goal found the other McGrath, John, who drilled the ball home for a 2-20 to 0-18 lead in the 50th minute.

Cork weren’t entirely done but it was now getting harder to see where the recovery would come from. Shane Kingston was taken down by Seán O’Brien when steaming in on goal, a useful transaction that cost a pointed free and a yellow card. Séamus Harnedy’s 65th-minute goal cut the margin to four and Meyler said he felt that it made a recovery possible but Tipp answered that with four of the last five points.

Just minutes previously Horgan had been penalised for barging into Cathal Barrett with the home crowd baying their disapproval. The Tipp defence was excellent, though, able to deal with both the pace of the opposition attack and also the aerial threat posed by Aidan Walsh and Declan Dalton when Cork ran their bench.

“I’m going on what I see in training. I’ve seen them up close for months now and seen the condition they have got themselves in. I thought every line, the heroic defending we done finishing up there was very much to like but these guys are able to play. The day someone tells me that someone at 29 years of age is too old to play in championship hurling; that’s contrary to what I think.”

Meyler was making no excuses.

“I think Tipperary were more fluent, sharper, more mobile - better support play than us today. They looked extremely hungry, they got a very good start with the goal, they got a good advantage on us early on, in the first half, but we brought it back to a point at half-time.

“I thought we’d get in at half-time and re-organise, get back to the basics again, but again, they came out for the second half and drove on again. That goal they got up in the top end really kind of finished us off there.”

1 Munster earn bank holiday bonus in entertaining Thomond Park tussle
2 Seán O’Brien: Anger over my parents’ break-up never left me
3 Madness or defiance? The GAA is taking a huge gamble in staging Championships
4 All in the Game: Klopp’s Amsterdam subs don’t go down well
5 Sportsman to statesman, Marcus Rashford is a ray of light in the darkness
Real news has value SUBSCRIBE