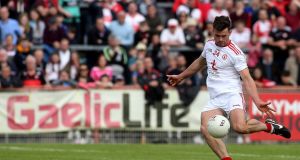 For Derry it was all about closing the chasm that has grown between themselves and their north-west neighbours, and they can justifiably reflect on yesterday’s six-point defeat as progress.

The anticipated landslide never materialised as Tyrone laboured to an unconvincing Ulster SFC preliminary round win at Healy Park.

Derry crossed the Sperrins more in hope than expectation that they could test last year’s All-Ireland finalists, but they delivered a performance that reflected a significantly higher plain than their Division Four standing.

The Red Hands, with Mickey Harte at the helm for the 100th time in the championship, will not be unduly concerned as they look towards a quarter-final clash with Antrim, mindful of last year’s slow start and subsequent recovery to challenge for the Sam Maguire in September.

The impossible somehow seemed possible for Derry when Shane McGuigan smashed home a goal, followed by a Chrissy Bradley point which them the lead for the first time in the 62nd minute. But the hope that burned in the hearts of Derry fans in the 10,116-strong crowd soon turned to despair.

Tyrone switched to a higher gear and Darren McCurry slotted home a goal with the finest precision, as they outscored their neighbours by 1-5 to 0-1 in the closing 10 minutes to set up a quarter-final meeting with Antrim.

“I suppose it was a no-win situation for us,” said Tyrone manager Harte. “We were supposed to win the game and we believed we were good enough to win the game but we know there are always exceptions to the rule and those exceptions happen from time to time. We were eight or nine minutes away from that exception happening today.”

The game ended as it had begun, with the Red Hands in control. While playing against the wind they eased into a 0-6 to 0-1 lead inside the opening quarter, with target man Cathal McShane giving Brendan Rogers a testing time.

McShane and Richie Donnelly had two points each on the board early on, with Peter Harte converting a free, while Shane McGuigan, who was to finish with 1-6, was the only Derry player capable of troubling the scoreboard.

But Damian McErlain’s men stepped up their aggression in the tackle, pressed up on Niall Morgan’s kick-outs and began to get some joy, with Ryan Bell and McGuigan punishing fouls as the home defence conceded frees in dangerous areas.

McGuigan narrowed the gap to within a point on the half-hour, but Tyrone rallied again to lead by 0-10 to 0-7 at the break.

Chrissy McKaigue and Enda Lynn were highly influential as they drove the Oak Leaf challenge in the second half, going score for score in the third quarter as McGuigan and Bell cancelled out points by impressive debutant Michael Cassidy and Hugh Pat McGeary .

And in the 55th minute, a majestic pass from Lynn sent McGuigan in for a thunderous finish to Niall Morgan’s net, levelling the scores.

Substitute Chrissy Bradley edged the Division Four champions ahead in the 63rd minute, and the unthinkable suddenly seemed eminently possible.

But Tyrone kept their cool and substitute Darren McCurry ran on to the perfect delivery from Frank Burns to pick his spot in the bottom corner of the net a minute later.

A power-play finished the job off as they forced their opponents into submission, and points from McShane. Michael McKernan and Connor McAliskey ensured a comfortable winning margin.