Attention now turns to Mayo after Leitrim brushed aside 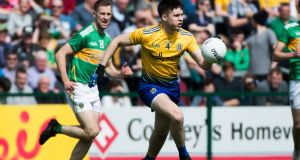 Another championship encounter between these two fierce rivals, another cakewalk for Roscommon.

For the last three years, Roscommon have prevailed by 13, 17 and 14 points respectively against their neighbours from across the Shannon. It was no different in this latest instalment as Anthony Cunningham’s side cruised into a last four encounter against Mayo in Castlebar on May 25th.

Leitrim arrived in confident fashion on the back of an excellent Division Four campaign but they found a more seasoned and streetwise Roscommon outfit a different proposition to anything they had faced so far this season. From an early stage, it was obvious that there would be no repeat of their famous victories at the same venue in 1994 and 2000.

The damage was done in the opening half when a brace of goals from midfielder Shane Killoran and another in the 34th minute from Niall Kilroy left the Rossies in the driving seat at the break, leading by 3-6 to 0-7.

Leitrim stemmed the bleeding in the third quarter before the sending off of Shane Quinn allowed the floodgates to open in the last 15 minutes as Roscommon kicked points for fun.

“The attitude was spot on. There was also the added pressure of playing at home and the expectation to win,” said Roscommon manager Cunningham. “Sometimes that is hard to handle.

“We have great respect for Leitrim. They had a tremendous campaign in Division Four, were very good in the league final and ran Derry very close. We were worried and prepared very hard.

“But the experience over the winter and the last few years, these players really want to step up. It is a big step-up and it will be a further step-up in 13 days’ time (against Mayo) but one we are really looking forward to.”

The visitors could have received an early tonic but Roscommon goalkeeper Darren O’Malley did brilliantly to deny Shane Moran, who was positioned on the edge of the square and caused the 2017 champions plenty of problems.

But once Killoran cut through the Leitrim defence, after good work by Conor Hussey, to grab his side’s opening goal in the fifth minute it set the template for Roscommon’s undisputed dominance.

Other goal chances came and went before Killoran, availing of a good advantage by referee Seán Hurson, brushed aside a few flimsy Leitrim tackles for a second three-pointer.

The writing was on the wall for Leitrim and despite the accuracy of Ryan O’Rourke and Domhnaill Flynn from frees, alongside decent points from play by Raymond Mulvey, Quinn and Pearce Dolan, they never looked likely to recover.

Then, with a minute remaining in the half, Roscommon struck the decisive blow. Conor Reynolds gave away possession from a lineball and the home side went for the jugular. Conor Cox cut the Leitrim defence to shreds and set up Niall Kilroy for a simple finish. Game over.

Roscommon’s scoring rate dried up in the third quarter but Leitrim’s only source of encouragement came from Moran, who continued to cause the Roscommon full back line problems. The frees he won were duly converted by O’Rourke and Flynn but the goal that they needed never looked like coming.

Cox kept the scoreboard ticking over for the home side as they led by 3-8 to 0-10 by the end of the third quarter. But once Quinn picked up a second yellow card, Roscommon made their numerical superiority count.

Andy Glennon marked his introduction for his championship debut with two frees when Diarmuid Murtagh picked up a black card. Fintan Cregg, Colin Compton and Cathal Heneghan also looked lively off the bench as Roscommon hit the after-burners and disappeared over the horizon.

Conor Daly picked up two yellow cards in quick succession but it didn’t matter. Roscommon’s thoughts had already turned to Mayo - a team the Rossies haven’t beaten in the Connacht championship since 2001.

“We have massive respect for Mayo. We don’t fear them and we are going down there to win. It’s championship and that’s what you have to do,” remarked Cunningham.

The dye has been cast.