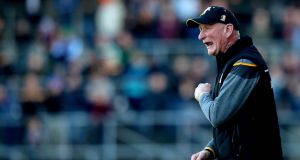 Kilkenny manager Brian Cody: . It was inexplicable, really, that he (Kennedy) decides to catch the ball. It was certainly unprecedented. So I wasn’t happy about it, no I wasn’t.” Photograph: Ryan Byrne/Inpho

Bizarre. Unbelievable. Inexplicable. Unprecedented. Brian Cody was left feeling a little BUIU in the immediate aftermath of this, and imagine what he’d be like had Kilkenny lost.

It wasn’t exactly the turning point of the game, only from Cody’s perspective possibly the making of it: when, in the 33rd minute, TJ Reid’s quickly-taken free was cleanly intercepted and caught by Dublin selector Greg Kennedy, on the field as the team runner, just not exactly where he should be. Cue the sort of anger all hungry cats feed off.

Reid was attempting to line up a goal chance, given Kilkenny were about to head into the break four points down; after Kennedy’s interception, match referee Cathal McAllister demanded the retake, which Reid did convert, only after Cody had told Kennedy exactly what he thought of the interception when returning to the sideline. (Words possibly less polite that bizarre etc . . .)

“It was bizarre, completely bizarre, an unbelievable thing to see,” said Cody, who in his 21 years of sideline duty had never seen anything like it before. “Obviously TJ spotted Wally (Walter Walsh), a goal opportunity, which was on, definitely, and would have meant a huge amount to the team at that stage. It was inexplicable, really, that he [Kennedy] decides to catch the ball. It was certainly unprecedented. So I wasn’t happy about it, no I wasn’t.”

Nor was Reid, or indeed the Kilkenny supporters who filled most of the 9,496 attendance in Nowlan Park on Saturday evening: suddenly there was some anger in the air, and Reid came out in the second half and acted on it. His first goal, a super one-two with Colin Fennelly, had Kilkenny level on 47 minutes; Reid’s second 10 minutes later from the penalty spot, after Fennelly’s shot into the goal was called back, was struck with real anger, and there was no way back for Dublin after that.

So ended the first proper hurling match of the summer, flat out hard already, Kilkenny’s comeback another act of ruthlessly familiar physicality. It did require some running repairs, after Dublin lorded most of the first half, before Kilkenny did to Dublin what they had done to them; out-worked them on the ball, closed down the route one scoring avenue.

“Very happy to win the game, after a huge challenge, particularly in the first half,” added Cody. “At times in the first half they threatened to extend that lead, and I thought we hung on well. We made the few changes at half-time (dropping Huw Lawlor into full back, Pádraig Walsh to centre back, Richie Leahy and Richie Hogan coming off the bench) which probably did help a bit. But it was a question of everybody just upping everything their game. It spread right throughout the field, and there was a terrific energy throughout in the second half.”

Reid’s proper captain-like display saw him finish with 2-12. What was said at half-time after the Kennedy incident clearly contributed something: “I suppose half time is there for a reason, to figure out how we’re going, going we’re not going,” said Reid. “But there was nothing crazy said at half-time, no hurls broke, just a few honest words said by players and management. We were only at about 70 per cent, so we had to up our game.

For Dublin manager Mattie Kenny it’s a question of what might have been, had Dublin been able to sustain their four-point advantage at the break, which they had stretched to six points on the half hour. The Kennedy incident, he gently insisted, was entirely accidental.

“Look it, I known Greg a long, long time,” Kenny said of his fellow Galway man. “Greg is a real top-class sports guy. He’s very competitive but one thing about him, he wouldn’t do anything like that deliberately, and he assured me it was just a reaction when the ball came over his head. The whistle hadn’t gone, he was going off the field. The ball was coming over his head, he told me it was just kind of a reaction thing.”

“I thought the lads put in a good performance. They’re disappointed, but any time you come to Kilkenny it’s a difficult place to get result. The last 20 minutes we went too much route one, and that allowed Kilkenny to eat that up, and gave them more space. I think we got some great scores in the first half, and just needed some mental discipline to keep doing that. But everyone kept trying, no one threw in the towel.

Dublin won’t get much time to breathe, Wexford coming to Parnell Park next Sunday. “I’m not sure it’s ideal, it’s the reality. It’s a five-team league, four matches, there’s a lot left in this Dublin team, and I think we’ll only get better as the championship goes on.”

Some had questioned Kilkenny’s depths, others even their spine, but it was same old Kilkenny, wearing Dublin down with a second half grind that had Cody’s 21 years of experience written all over it. Dublin certainly forced the best out of Kilkenny, creating a fine spread of scores in the first half: on nine minutes Liam Rushe, acting like a wrecking ball in front of goal, was hauled down: penalty. Sean Moran came up from centre back to drill it into the net and Dublin were up 1-3 to 0-3.

Later, four points in quick succession from Danny Sutcliffe, Rushe, Sean Treacy and Fergal Whitely had Dublin six points in front, 1-11 to 0-8. Two minutes before the break Rushe played wrecking ball again and won another penalty, Moran opting to send this one over the bar. After that they broke for the half with Dublin still holding their advantage, 1-13 to 0-12.

Not enough to see Dublin out, however, and so still seeking a first win in Kilkenny since 1942. They had the chance but maybe needed something BUIU of their own to make it happen.