Strong finish fails to paper over cracks for Galway 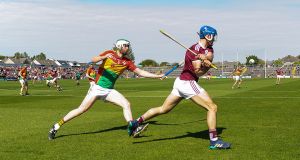 All-Ireland runners-up Galway got their provincial champions up and running with a win, but it was less than straightforward for Micheál Donoghue’s side as Carlow pushed them all the way in Salthill.

On five occasions in the second-half only three points separated the sides as Carlow began to dominate their hosts, but there was never any doubt that the Tribesmen would win their Leinster SHC opener in Pearse Stadium.

Carlow will be thrilled with their performance in front of 6,097 spectators, and with Marty Kavanagh in sublime form they were given a sniff of victory, but Conor Whelan fired three points from play in the second period and Conor Cooney’s goal in the first minute after the break helped them to victory.

But the two points earned won’t paper over the cracks of this Galway showing. They were wasteful in front of goal, hit 13 wides and made several poor decisions in general play and in their shot selection.

Without the injured Daithí Burke, and with John Hanbury and Adrian Tuohey named on the bench as they return from injuries of their own, the entire full-back line from Galway’s All-Ireland winning team didn’t start. Marty Kavanagh started in the right corner for Carlow and caused plenty of trouble in there and when he roamed deep into the centre forward position.

It was Seamus Murphy who got Carlow up and running, but Kavanagh soon landed his first in the fifth minute to double Carlow’s lead.

Without the injured Joe Canning, Galway’s free-taking was left to Niall Burke and his four successes from placed balls by half-time meant his side were well in control.

But Carlow refused to come to Galway, register a bright start and head off home happy with their lot. Their worst period of the game came in the second quarter when Galway scored eight of nine points, but two Kavanagh efforts meant they only trailed 0-14 to 0-8 at half-time.

That was a brilliant spell of Galway play though. The positioning of Cathal Mannion at midfield alongside David Burke worked well and both players pointed in that time, while Conor Cooney landed three points from play before half-time and Brian Concannon excelled in the play-making role.

Cooney’s goal from a tight angle 20 seconds after the break put Galway into a nine-point lead, but a Kavanagh free and a goal from Chris Nolan two minutes later lifted Colm Bonnar’s side and they went on to boss long stretches of the second half.

There were murmurs of discontent among the home support at that stage, and when Kavanagh hit two points from play in the space of a minute just a goal separated the sides. The sides swapped scores to maintain that difference with eight minutes remaining, but Galway finished strongly and hit the last three points to put a twist on the final winning margin.

Carlow host Kilkenny in next week’s Round Two game at Netwatch Cullen Park, while Galway don’t have another game until Wexford visit Pearse Stadium in two weeks’ time.