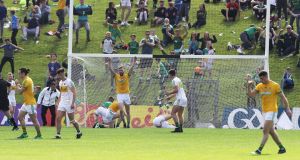 Offaly manager John Maughan must hate the sight of Meath after the Royals inflicted more misery on the Mayo-born boss in the Leinster SFC at Pairc Tailteann on Sunday.

Maughan was in charge of his native county when they lost the 1996 All-Ireland following a replay when they had the game for the taking.

Offaly found themselves in a similar position in Maughan’s first championship game as they led by four points near the end of the third quarter. They looked set to cause a massive shock but were unable to close out the game and that gave Meath the opportunity to stage a late rally and book a quarter-final clash with Carlow.

It was Bryan McMahon who provided the killer punch with a goal on 63 minutes to turn the match in Meath’s favour. There was a touch of good fortune about the goal. An effort from James Conlon fell short, and as McMahon contested the dropping ball with keeper Paddy Dunican it fell kindly for the Meath man who gave it a helping hand over the goal line.

Substitute Conlon stretched the lead with a point and Offaly’s only response was a similar effort from Niall Darby deep into added time.

Offaly belied their outsiders tag in the early stages during which they enjoyed an abundance of possession to lead 0-4 to 0-2 after 19 minutes. The visitors also squandered a number of chances when in the ascendancy and they were to prove costly at the final whistle.

Meath made a tentative start to proceedings and struggled to contain Offaly’s veteran attacker Niall McNamee, while they also laboured around midfield where Peter Cunningham and Eoin Carroll had the upperhand.

However they produced a strong finish to the half during which they scored four unanswered points from Bryan Menton, Thomas O’Reilly, Cillian O’Sullivan and Newman to lead 0-9 to 0-6 at the break.

The second half was 20 minutes old before Newman added to the Meath tally and at that stage Offaly had taken control of proceedings.

Boosted by two McNamee scores Offaly were level just seven minutes into the second half.

Eoin Carroll, McNamee and Bernard Allen all pointed to ease Offaly into a three point lead by the 46th minute.

Newman reduced the deficit from a free and then drew Meath closer from play. When Bryan McMahon pointed it left the minimum between the sides on 60 minutes.

That fortuitous goal proved the game changer and there was no way back for a tiring Offaly.