Talking about my generation: Kilkenny and the boys of ’93 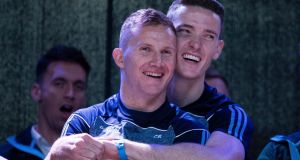 Kilkenny and Fenton at the Dublin homecoming in Smithfield. Photo: Tom Honan for The Irish Times

It is easy to forget that Ciarán Kilkenny has been around quite a long time for someone who turned 25 only in July. He has just won a fifth All-Ireland medal and is odds-on to be Footballer of the Year when his fellow inter-county players vote on the matter in the weeks ahead.

On Thursday he is doing a media conference in his role as brand ambassador for Sure, the GAA’s official statistics partner . Their findings draw attention to Kilkenny’s exceptional summer, as his scoring total rose from 1-9 to 2-24 as a result of his shooting rate doubling from 19 to 43 and his accuracy improving from 53 per cent to 61. It left him as the top scorer from play in this year’s championship.

It’s an appropriate promotion for a footballer who during Dublin’s four-in-a-row has specialised in taxing the statistical boundaries for individual possessions and plays in a match.

A talented dual player whose footsteps echoed after him when underage – he played in both hurling and football minor All-Ireland finals in 2011 – he made his senior debut for Dublin footballers less than 12 months later in Pat Gilroy’s last year, replacing Kevin McManamon in the Leinster semi-final against Wexford.

It’s his first start that people best remember; wearing number 26, he was sprung before throw-in for the All-Ireland semi-final clash with Mayo. Although Dublin lost, Kilkenny kicked three points from play. Previously in 2012, he had won an All-Ireland under-21 medal.

“I was told a couple of days before the game that I was starting,” he says of the full debut against Mayo, “and word got out before the game. It was an incredible feeling and those days when you feel that hurt and that loss you really bottle it up and remember it to drive you on.”

He doesn’t need a great memory to remember the hurt, as it remains his only championship defeat with Dublin, putting him nearly on par with his contemporary Brian Fenton (also a FOTY nominee, as is another of the1993s, Jack McCaffrey) who has yet to finish on the losing side in provincial or All-Ireland matches four completed seasons into his county career.

He’s equal with Fenton in terms of the league: two career defeats, both against Kerry in 2015 and the ’17 final. Fenton came on as a replacement in the first match, started the second as well as Dublin’s only league defeat – by Monaghan last March when Kilkenny wasn’t playing.

It’s easy too, to forget how he was lost to the game for two distinct spells, one nearly permanent when he signed up with AFL club Hawthorn but returned at Christmas 2012 and reconsidered. Then, having won his first All-Ireland in 2013, he ruptured his cruciate the following March in a league match against Kildare.

“The actual loss of not being able to train and be involved with the group and involved with guys that you’ve developed a special bond with all the way up, just made me appreciate the game a lot more. All of these different challenges have an impact on you and motivate you.”

The link with his own cohort, those born in 1993, remains strong and was forged during their years growing up and in underage setbacks.

“My club Castleknock – every game we played against Raheny, me and ‘Fento’ would have marked each other in county finals year in, year out and we would have been tearing the head off each other and that’s just a unique bond of mutual respect that you develop when you play against them.

“Then you actually get the opportunity to play with them on the field and to be as successful. But I remember when we lost that All-Ireland final against Tipperary [as minors, 2011] myself and Jack were in the shower and said ‘let this hurt drive us on and hopefully we won’t be in this situation’. We went on and we won the [2012] U-21 All-Ireland final after that.”

Asked about the impact of special funding on Dublin’s success, he prefers to highlight the voluntary work of former players, such as his U-13, minor – and later U-21 – manager, Dessie Farrell (“a massive role model for us”) and Stephen O’Shaughnessy, who took the years in between.

He acknowledges that he had prepared better for a scoring role in the team this year.

“I was probably a couple of kilos heavier than I normally would have been, so I made a bit more of a conscious effort to be a bit more powerful . . . so I did a bit more in the gym. If I was playing that bit farther up the field then I needed a bit more power coming up against strong full-backs.”

1 Keith Duggan: Through the glories and the disgraces, we were all Maradona addicts
2 Diego Maradona dies of heart attack, aged 60
3 Gordon D'Arcy: I know what Joe and Cheika would do. Fix the basics
4 Handful of God: Five magic Maradona moments
5 Darragh Ó Sé: Cork and Donegal went out with the wrong attitude
Real news has value SUBSCRIBE