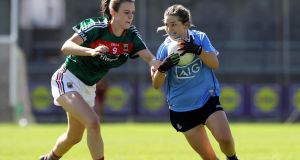 Dublin’s Martha Byrne is tackled by Mayo’s Clodagh McManamon. She says of final opponents Cork: “They took the game to a whole new level, so we have massive respect for them.” Photograph: Lorraine O’Sullivan/Inpho

She was 12 when she was called up to the Dublin development squad but, within a year or so, Martha Byrne decided it wasn’t for her.

She was the only Cuala girl in the group, surrounded by players who had the company of pals from their own clubs, and for one so young there was a loneliness to that.

“When there are six or seven girls from Ballinteer St John’s, or wherever, and you’re there by yourself, it’s hard at that age,” she says.

So, she withdrew from the squad and just played her football with Cuala, a place that had felt like home for as long as she could remember, where she had grown up watching her mother’s brothers play for the club.

Six years later, though, she regretted not sticking it out when she watched Dublin winning an All-Ireland minor title on television.

“And all I was thinking was that could have been me,” she says.

She decided to give it another go and went along to Dublin trials. And didn’t get picked.

“It was really disheartening, it kind of felt like I’d missed my chance,” she recalls.

But when she started lining out for UCD her team-mate Noelle Healy, the 2017 Footballer of the Year, suggested to Dublin management that Byrne was worth a look. And she’s been playing for the Dubs ever since, at U-18, U-21 and senior level.

It was a couple of months after the third of those losses that Mick Bohan was appointed Dublin manager.

“I remember him saying ‘there’s a kind of a cloud over you all’,” says Byrne, “so he reminded us why we play the game in the first place – because we love it. And no matter how hard those defeats were to take, we should never forget that. And I have never forgotten that.”

“Of course everyone’s goal is to win an All Ireland, that’s part of why you’re there – but it’s not the only reason you’re there. It’s your hobby, it takes up nine out of the 12 months of your year, it has to be about more than just chasing that one title, you have to enjoy the whole experience.

“And I love every minute of it, especially because the girls are my best friends. The documentary about us was called Blue Sisters, and I know it’s clichéd, but that’s how it is. I see more of the girls than I do of my own sisters – and I live with them.”

The 24-year-old, who is doing an MSc in Clinical Nutrition and Dietetics in UCD, was encouraged to give Gaelic football a go by Cuala stalwart Colmán Ó’Drisceoil, the principal at the national school she attended, Scoil Lorcáin in Monkstown, having initially just played camogie for the club.

When she moved on to Coláiste Íosagáin she also took up basketball.

“Six or seven of this Dublin team went there too and most of us played basketball which I think definitely helped us with the Gaelic – it just gives you an edge, a way of understanding a team game.”

Soon enough, though, her focus was solely on football and Cuala.

“I know everyone loves their own club, but I really LOVE Cuala,” she laughs. “When I was playing camogie there the girls’ underage section completely collapsed, there was no team, which is so hard to imagine now because the underage structures are brilliant – for the boys and girls, in football, camogie and hurling. Colmán played a massive part in all that, encouraging kids to join the club, to the point where football and camogie are so big there now.”

And in 2017 Byrne became the first Cuala woman to win a senior All-Ireland football medal when she lined out at right corner back in the team that beat Mayo.

“The feeling of winning an All-Ireland, it’s hard to compare anything to it, after months of working so hard for it. My mother and father sitting in the stands, your whole family in tears, and you can forget how much it means to them too. I can’t put the whole experience in to words.

“I think what I remember more than anything was the noise when we ran out. It was just so loud. And the size of the crowd [a record 46,286]. When I saw the Cusack Stand full, I just thought ‘wow’. I gave myself a second to take it all in. I remember Seaghan Kearney, one of our coaches, telling us that if we were nervous during the parade just to look at the back of the jersey of the girl in front of us. So for the whole parade I just stared at Ciara Trant’s back,” she laughs.

Before having to come off with cramp in the second half, Byrne had done her job, keeping Mayo’s Sarah Rowe scoreless. She’d convinced herself that she shouldn’t define her year by whether or not it ended with an All-Ireland victory, but still, her joy was unconfined.

“And because we’re all such good friends and we’ve been through so much together, it just makes that feeling so special. I’m asked sometimes who are my sporting heroes – they’re people like Amy Connolly and Emma McDonagh, both Fox Cab [Foxrock-Cabinteely GAA] girls.

“Amy is playing for Dublin, she did a Masters in Accounting, and she has a four-year-old who has just started school. Emma is the same, she has a three- year-old, she’s back playing Dublin and is finished her studies. They’re amazing, it can be hard enough just looking after yourself.

“Sometimes we’d be swanning about after training and they’re rushing home having to get back to their kids. They were talking about Serena Williams on the radio the other day, and it was brilliant that she could come back after having a child, but imagine doing what Amy and Emma do? Amy set a brilliant example. I remember having a chat with Emma about it, she said ‘if Amy can do it, I’ll give it a go’. I am just in absolute awe of them.”

Are you in awe of Cork too?

“No,” she laughs, when asked about Sunday’s All-Ireland final opponents.

“They raised the bar, what they did for ladies football was brilliant, they took the game to a whole new level, so we have massive respect for them. But they’re just another team we need to get past.

“And, for me at least, those three defeats to them are gone, we’ve moved on as a team from all that. They bring out the best football in you, although I’d like to think we bring the best out of them too.”