Tale of Kerry’s Twin Towers may still have another twist

As Donaghy retires, Walsh hints he still has something to offer the Kingdom in 2019 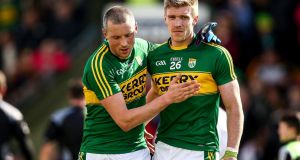 We have found ourselves back in 2008 quite a bit over the last few weeks. First of all it was the current Tyrone team, inviting comparison to that magnificent 15 that won their third and latest All-Ireland ten years ago.

And then in recent days we have had reason to go back and ponder the impact of Kerry’s Twin Towers of that year, Kieran Donaghy and Tommy Walsh. Donaghy retired on Tuesday and, after an extended hiatus, Tommy Walsh was back in front of our eyes, like he’d never been away.

But first things first – back to 2008. Donaghy at that stage was already well on his way to becoming a Kerry legend, a Player of the Year award winner in 2006 and an All-star winner in 2008 too. If Donaghy’s route to Kerry superstardom was seen as rather unorthodox, taking a detour or two through the basketball courts of Ireland and a reality TV show, Tommy Walsh’s couldn’t have been more clear-cut.

From the first moment he kicked a ball, he was his father’s son, and Seán Walsh had been one of the more spectacular members of Mick O’Dwyer’s green and gold galacticos.

After all, it is not like a footballing dynasty is unheard of in Kerry football – in fact, it’s hard to think of any non-horseracing setting where the idea of ‘bloodlines’ is more deeply embedded in Irish life.

From the moment he showed any promise, the way ahead was clear. Where Donaghy had to fight to be noticed, Tommy Walsh’s hand was stamped. His future was there, all he had to do was go and claim it.

In the 2008 and 2009 championships, he was a young player of stunning ability and physicality. When you look back at his record in that time, he’s not recording massive personal tallies, although the 0-4 he got in what turned out to be his last start for the Kerry senior team in the All-Ireland final of 2009 is pretty impressive.

What really excited people, like the arrival of Setanta Ó hAilpín on the hurling scene in 2003, was the thought of the player he would become. When the dust settled, long after he was named Young Player of the Year in 2008, he could be something really special.

And then, just like Setanta – he was gone. To Australia, to professional sport, where being Seán Walsh’s young lad meant less than nothing.

In 2006, Donaghy had to listen to plenty of people say that he’d be a flash in the pan, a one-hit wonder. But it was Donaghy who lasted the course, who showed the longevity, he who won the All-Ireland for Kerry in 2014, he who even this year managed to insinuate himself into the build-up to the season’s most dramatic goal, scored by David Clifford in the last minute in Clones.

Their names were thrown back together when, with Kerry newly crowned All-Ireland champions again after Donaghy’s goal in the All-Ireland final against Donegal, Tommy Walsh announced he’d be returning from Australia in October of 2014.

No one for a moment doubted he’d be a massive asset to Kerry. He was brought back into the Kerry panel pretty much immediately, when a spell playing club football with Kerins O’Rahillys might have been more beneficial. It didn’t work out, but you could hardly blame Eamon Fitzmaurice – he remembered 2008 and 2009 as well as the rest of us.

The transition from Australia back to Ireland hasn’t been easy. But that brings us to Killarney, last Saturday evening, with Kerins O’Rahillys nine points down to the all-conquering Dr Crokes with 10 minutes remaining in the Kerry county championship. Enter Tommy Walsh. Two goals by him, followed by another for wing-back Karl Mullins, has them three up in injury time.

Kerins O’Rahillys have one last kick-out to secure to ensure they don’t get caught with a late sucker-punch. Up Walsh goes, soaring high above his opponent, making a spectacular mark. He’s turning in mid-air, so as he lands he’s already heading for the crossbar. Two toe-taps, three hops, and he kicks a wonder score to seal the win. The camera stays on him as the final whistle goes and he lets out a guttural roar.

Dr Crokes are still in the championship, so we don’t know if this is a changing of the guard in Kerry club football. And we don’t know if Walsh really has what it takes to bring that sort of grandstanding impact to the inter-county stage – he’s 30 now, and Kerry have a minor or two coming through, as we all know.

But all of a sudden, he’s the outsider. Where once the road to the jersey was clearly laid out, now Walsh has the most quixotic of journeys ahead of him to get back to the Kerry fold for 2019. As Donaghy departs, there might still be a twist in the tale for 2008’s Twin Towers.

Corofin combine total football with dark arts for three-in-a-row 20:03
Salah seals the deal as Liverpool see off a dogged Man United 18:39
Connacht huff and puff but Montpellier pull away at the end 18:36
Hockey: Ireland strike late on to claim bronze 17:55
Champions Cup: Leinster meet Saracens and Ulster face Toulouse in quarter-finals 17:13
Crossword Get access to over 6,000 interactive crosswords