Camogie referee gets off lightly compared to Serena’s umpire 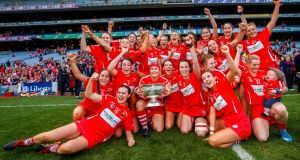 It was just as Serena Williams was having her first blazer with the umpire that the Amazon Prime picture finally appeared, until then the frantic search for the live link to the US Open final on their website yielded only an ad for a Kong Wubba Ballistic dog toy that, they promised, would be delivered by Tuesday.

Once the coverage was up and running, ballistic was the only word, Carlos Ramos seeming in danger of ending up in much the same condition as the Kong Wubba will be come Wednesday: shredded.

Annabel Croft didn’t know where to look. “I’m absolutely speechless,” she said as Serena began emitting lava, the relief close to palpable when the contest came to an end.

Back in the studio, Catherine Whitaker and her guests weren’t quite sure where to start, Daniela Hantuchova and Greg Rusedski eventually concluding, after examining all the violations, that the umpire couldn’t be faulted, he’d made the right calls. And Serena had nobody but herself to blame.

“Can we talk about Naomi Osaka,” Rusedski then somewhat plaintively asked, but the winner was lost in it all, and if your heart wasn’t in smithereens for her during the presentation ceremony, then it’s made of granite.

Later, the chat became all about the reaction to what had happened, and it’s at times like this, whenever Serena finds herself in a spot of hot water, that your heart would sink, even it was wrapped in a lifejacket. You know, when the discussion decomposes in to one that resembles that rational debate you oft see on the tweet machine?

On the one hand you have the tribe who take a special glee in another opportunity to scunder her, having never once given her credit for anything she achieved; on the other you have the camp who will defend her no matter what, regardless of how obnoxious her behaviour is. And if you’re somewhere in between, you’re in no-man’s land.

“She has said that she is fighting for women’s rights and equality,” Catherine told us of Serena’s post-match comments, which, under the circumstances, you could only interpret as meaning that female tennis players should be allowed to behave as dickishly as, say, Nick Kyrgios and Novak Djokovic do of occasion, and go equally unpunished. You just can’t imagine this is why Emily Davison threw herself under King George V’s horse.

Life has thrown more than enough reasons at Williams for her to be filled with rage, but Ramos’ umpiring wasn’t one of them.

So, if we could just agree that (a) she remains a sporting legend, but (b) she behaved dickishly on Saturday and despite 58,000 column inches attempting to defend her behaviour, there still really was no excuse for it, then we’d be grand.

The ref in the camogie All-Ireland final got off lightly compared to Carlos. Just a disbelieving glare or two when he didn’t award Kilkenny a penalty of the stonewall kind, mercifully no accusations being thrown his way about being a thief and such like.

RTÉ panellist Elaine Aylward was not amused, though. “We knew the game would be decided by small margins,” she said, “. . . but it shouldn’t be refereeing margins”.

Cork prevailed, then, the final considerably less than a classic, but producing a climax that would have had onlookers perched on the edge of their seats. And for the second year running Kilkenny lost by a late point. Did we mention hearts in smithereens?

They’ll need Monty Panesar’s bouncebackability powers to come again. The cricketer is currently starring on the BBC’s Celebrity Masterchef and while he might have mastered googlies, he’s shown all the composure in the kitchen of a tail-ender facing a bouncer.

His finest culinary hour came when he had to present ravenous airline staff with a dessert featuring a blueberry compote. He poured his heart and soul into the challenge, and finally had a result.

And announced his dessert to the staff as “a lemon posset with granola and blueberry compost”.

For evermore Monty will wonder why the airline staff’s faces said, “you’re grand, thanks”. They’d rather have eaten a Wubba Ballistic dog toy.

Johnny Sexton aware of how Ireland can offer fans an escape 15:34
Jason Holder ‘disappointed’ in Australia and Pakistan for not taking the knee 13:17
Arsène Wenger: Arsenal was a matter of life and death to me 10:06
Extremes of sweet and sour for Solskjaer as Man United show signs of revival 10:08
Slaven Bilic hits out at €16.95 pay-per-view for West Brom’s draw with Burnley 08:31