‘A totemic figure for Kerry’ - Kieran Donaghy has retired 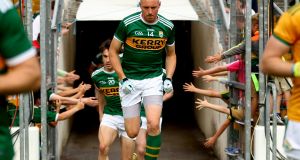 Kerry’s Kieran Donaghy takes to the field for his last ever match. Photograph: James Crombie/Inpho

Kieran Donaghy has retired from the Kerry senior footballers 13 years after making his debut in the 2005 Munster final.

Since then ‘Star’ has won seven more Munster titles, four All-Irelands, three All Stars and in 2006 he was named Footballer of the Year. The 35 year-old had played for two years with the Kingdom at Under-21 level and one at minor, before making his name as a ball-winning midfielder in the TG4 Underdogs series in 2004.

He went on to become a part of the Kerry senior panel and in 2006 Jack O’Connor decided to try him at full-forward for a qualifier against Longford. The Austin Stacks clubman turned the team’s season on its head. Six years later he repeated the trick, coming off the bench to force a replay in the All-Ireland semi-final against Mayo. Before inspiring the team to yet another All-Ireland.

In all he made 69 appearances, scoring 14-36 in the championship. His last appearance came in the Super 8s win over Kildare, scoring a point before being replaced by James O’Donoghue at the interval. After playing basketball for Tralee Town in the National League during the last two off-seasons, he remained a huge threat on the edge of the square.

On Tuesday morning he released the following statement: “The journey has been full of ups and downs but I never wanted it to end. It has surpassed even my wildest dreams, that a basketball kid from Tralee would end up playing 69 times in the championship over a 14 year period for the famous green and gold.

“To every one of my Kerry teammates who I was lucky enough to have played with, I thank you for your patience, help and advice during those years. I’m blessed to have had the time of my life with you boys fighting on my back trying to win games for Kerry. We had some tough times, such is life but the wonderful stories and memories we shared will stick with me forever.

“To get the opportunity to soldier with and against some of the greatest players of all time is something I will always treasure.

“During my career I have been lucky enough to work with some great Kerry managers and their respective management teams. They took a chance on me, believed in me in massive high-pressure situations. They gave me the confidence to develop my game which allowed me to perform on the biggest of occasions for Kerry .

“I would like to thank the Kerry County Board along with our sponsors Kerry Group, backroom staff and medical teams for their constant help and guidance throughout my career. Your unbelievable work is not seen by many but it’s massively appreciated by the team and by me.

“A huge thank you to the loyal Kerry fans who travelled far and wide to watch and support us. We love football in this county and while there is a pressure to perform we always embrace it. We need to get behind this young team we will have next year, so get the flags out and get to the games to support the boys. I would also like to thank all the supporters who live abroad but continue their love and support of Kerry.

“I would like to thank my club Austin Stacks, everything I achieved is a direct result of the help and guidance ye gave me from an early age. To represent this great club is always a massive privilege and our county championship win in 2014 gave me the ultimate honour the following season. To be captain of a county like Kerry is something I’m extremely proud to have accomplished.

“To my family, without you none of this would have been possible. Mom, I am forever grateful to you for believing in me and showing me how to be a good person first and foremost.

“To my wife Hilary, you’re all that I could ask for, thank you so much for always putting me first during my career , we have had so many wonderful experiences together throughout this journey and made life long friends along the way I can’t wait to start the next exciting chapter together with Lola-Rose and Indie.

“To the rest of my family, thank you for your support and always having my back. I’m a proud Kerry man and to have represented this county meant absolutely everything to me. As the great John B Keane once said, ‘I’m one lucky hoor!’”

Meanwhile departing Kerry manager Éamonn Fitzmaurice, who played with Donaghy until 2007 and managed him from 2012, described him as being “a totemic figure for Kerry since he broke into the team in 2006 and has lead from the front since. He book ended his career by re-energising an ailing group in 2006 and inspiring a new group in 2018.

“Kieran came on the scene as a rangy midfielder, was converted with huge success into a target man full forward and has embraced a variety of roles on the team since. His physical attributes and basketball background meant he was outstanding as the fulcrum of the attack.

“His biggest asset however is undoubtedly his personality coupled with an unmatched energy. His will to win and determination to succeed are what make him different. He overcame plenty of disappointments to come back better and stronger. A snapshot of the 2014 season epitomised his resilience where he failed to see game time in the All Ireland quarter final but ended up absolutely central to that All Ireland win.

“He has the personality to go into management. He is the ultimate team player, has a strong appreciation of the team dynamic, possesses a great tactical understanding of the game and most importantly is brimming with ideas. I can definitely see him successfully managing Kerry teams in the future.”