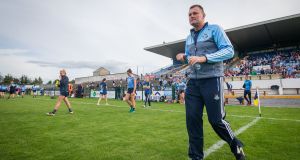 Mick Bohan: “it was the first thing we went after. And when Loosehorse said they would cover it, that’s what made the documentary happen. That was the decision.” Photograph: Oisín Keniry/Inpho

Mick Bohan was driving the family cross country to Clare during the summer when they stopped off for a break in Obama Plaza.

As they milled around, he was approached by a young girl, maybe 11 or 12 he reckons. Out of nowhere, she asked the manager of the Dublin women’s football team for a selfie.

“Now, I’m looking around to see if her mother or father are anywhere around,” he remembers. “And sure the dad was over in the corner waving back at us. ‘Sixteen viewings of Blue Sisters – you can have her!’”

The film, capturing a year in the life of Bohan’s team, went out last November, bringing the whole country inside the dressing-room of the Dublin side en route to their All-Ireland title.

Beautifully shot and put together by Loosehorse Productions, it made a stir all over, pulling together strands of different players’ stories and packaging them for an audience who’d otherwise never come across them. But, as Bohan explains, it very nearly didn’t happen at all.

“Cormac Hargaden, the guy who ran it for Loosehorse, is from Clontarf, I would know him. Pat Comer, the director, was the sub-keeper with Galway. Cormac rang me one day and our discussion on the phone was very brief.

“I just said, ‘Cormac, not a chance. If I was in my second or third year and we had done something, they it’s certainly something we’d consider. But first year and with everything these guys have gone through, if they were to fail publicly, this could destroy them altogether.’”

Hargaden and Comer kept going after him though, with Comer door-stepping him at work and Hargaden turning up at his mother’s house in Clontarf to bend his ear.

Bohan had talked to the players about it and they weren’t against it but he was still reluctant to agree, the downside of it just looming too large. That was until Hargaden made a last-ditch appeal, promising to solve a problem Bohan had been struggling to come up with a solution for since he came into the job just a couple of months earlier.

“At that time – and this is true – this group were coming here to training and they weren’t getting fed,” Bohan says.

“People talk about finance in Dublin – I still  remember the conversation I had with Sinead Finnegan about coming to training and going home at half-ten at night and having beans and toast when she got home.

Once they had an agreement in place that they could veto anything too raw, Bohan and his team welcomed the cameras in. The result was typical of Loosehorse’s work – cinematic, compelling and always insightful.

The story of Nicole Owens caught a lot of attention afterwards, the corner-forward speaking openly about her struggles with depression and coming through dark times in her life. That stuff sticks, always.

“I still remember the day after it was shown,” says Bohan. “One of the students coming up to me out in Mark’s Community School in Tallaght – this was one of my prize PE students who I don’t think I’ve ever seen in a tracksuit – and she goes, ‘That was deadly last night, sir.’ And I asked her what was deadly about it and she goes, ‘It was fu**kin’ emotional!’ And that was the best way she could articulate the effect of it.

“Nicole’s story, I know it does a lot of good for people to hear but then you’ve got to go back and ask, ‘How good is it for her that everyone knows this about her? We see it in the glare of a camera but what about the bad days for her?’

“Even this year, people have approached her way too often. Like, what people see is a lovely-looking girl, a good footballer, a fabulous athlete. But what we don’t see is all the times she’s struggling. Obviously her team-mates do because they’re all very supportive of her. But those are all the gambles you take when you do something like that.”

As anyone who saw it will attest, it was a gamble that paid off handsomely.