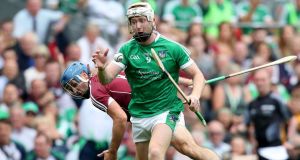 Limerick’s Cian Lynch: one of the three nominees for the Hurler of the Year award along with Galway duo Joe Canning and Pádraic- Mannion. Photograph: Bryan Keane/Inpho

Limerick’s rise to the top of the hurling world after an enthralling championship is reflected in the nominations for this year’s PwC All Stars awards.

John Kiely’s All-Ireland champions have emulated Tipperary from two years ago by claiming a full house of all 15 starters on this year’s short list.

Their predecessors Galway, who they defeated in August’s final, are next in the rankings with nine nominations although in the shortlist for Hurler of the Year, the Leinster champions outnumber Limerick two to one: outgoing HOTY Joe Canning is again in contention and is joined by his colleague Pádraic Mannion and Limerick centrefielder Cian Lynch.

The individual award was hotly contested this year. Mannion has been the frontrunner for much of the summer but Canning finished the championship very strongly, as his team began to slow down, and Lynch has been one of the great talents in the game and played a key role in his county’s first All-Ireland triumph in 45 years.

Beyond the shortlist there were also fine years for Limerick’s Graeme Mulcahy and Clare’s John Conlon, the outstanding full forward of 2018.

In the Young Hurler of The Year category (under-21), Munster champions Cork are doubly represented with last year’s winner Mark Coleman again nominated, along with his team-mate Darragh Fitzgibbon – both of whom were on the county’s Munster under-21 winning side – and Limerick’s Man of the Match from the All-Ireland final, Kyle Hayes.

In all, eight of the senior counties are represented in the nominations’ list – all but two of the teams, which featured in the championship this summer, which was run under the new, experimental structure of round-robin provincial championships.

Neither Offaly, who finished bottom of the Leinster group and were relegated, nor Waterford, who were last in Munster, received any nominations.

It was a particularly precipitous drop for Waterford who also lost long-serving manager Derek McGrath at the end of the season. A year ago, they narrowly lost the All-Ireland final against Galway and went on to receive 11 nominations and five All Stars.

This year was cursed with injuries and ill-fortune, most spectacularly the ‘ghost goal’ awarded to Tipperary in the Munster championship fixture, and Waterford ended up adrift of qualification. It is the first time since 1999 that the county hasn’t been represented among the All Star hurling nominations.

2016 champions Tipperary joined them in early elimination and slumped to just a single nomination, Jason Forde, whose scoring exploits during league and championship stood out.

Limerick’s annus mirabilis could even have been capped with 16 nominations, as there was an argument for 2014 All Star Shane Dowling who, although he featured mostly as a replacement, scored 2-24 during the championship, including a goal in the final and a major role off the bench in the All-Ireland semi-final win over Cork against whom he scored 1-3.

The new format has changed the conditions for selecting All Stars and, whereas the big All-Ireland matches justifiably continue to carry most weight in deliberations, there have been additional opportunities for players to give impressive performances.

In Limerick’s case for instance, full forward Séamus Flanagan was a consistent performer but outstanding in one of the big matches of the summer, the draw with Cork in Páirc Uí Chaoimh in June.

Galway’s season ran out of steam, not helped by having to replay two big matches, the Leinster final against Kilkenny and the All-Ireland semi-final against Clare.

Kilkenny won the league title in April and took Galway to a replay in the Leinster final and gain recognition with five nominations, up from two last year and led by Eoin Murphy, hot favourite to win the goalkeeping award and including last year’s short-listed TJ Reid and Cillian Buckley.

Clare lost the Munster final for a second year but went on to have a good championship, coming up short by a single point against Galway in the semi-final. John Conlon and Peter Duggan are strong contenders for All Stars and are joined by corner forward Shane O’Donnell, centrefielder Colm Galvin and full back David McInerney.

Wexford have two, Paudie Foley and Liam Ryan whereas Dublin wing back and captain Chris Crummey becomes the first Dublin hurler nominated since 2015 when Mark Schutte, now on the All-Ireland-winning football panel, featured in the short list.

Hurler of the Year Nominees

Young Player of the Year Nominees