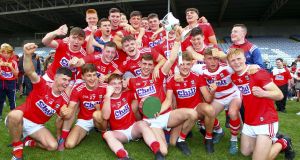 Cork celebrate their win over Dublin in the EirGrid GAA Football All-Ireland U20 Championship Final at Portlaoise. Photograph: Ken Sutton/Inpho

The changed scheduling of the All-Ireland under-20 football championship has not been well received amongst the GAA’s provincial councils.

Speaking on Thursday, Connacht CEO John Prenty said that it was a precipitous decision to switch the new developmental grade from summer to spring at such short notice and one that has contributed to the further downgrading of the once prestigious third-level competitions – a process that this week drew sharp criticism from eminent figures in both Sigerson and Fitzgibbon Cups, UCC’s Billy Morgan and IT Carlow’s DJ Carey.

“It was crazy to take the decision so late –” said Prenty, “in November when fixtures were on the verge of being completed and schedule it for February. It would have been better to defer it until 2021 when the schools and Sigerson Cup organisers would have a chance to incorporate it into their calendar.”

Prenty is not alone in this view.

His Ulster counterpart, Brian McAvoy, in his annual report to this year’s provincial convention, echoes the concern by saying that moving the competition from being independent of the senior inter-county championships has “merely replaced one problem with a bigger one”.

He goes on to say that “the U20 championship is primarily a developmental competition, yet costs were also cited as one reason for bringing forward the playing season. Much of these costs could have been averted had counties adhered to the ‘collective training’ start date of 1st March, which if the truth be told was largely ignored.

“While moving the start date forward may address the cost and ‘senior clash’ scenarios, it certainly didn’t address the issue of player welfare and young players being pulled from ‘pillar to post’. It actually compounds the problem.

“The timing of the U20 championship now puts it on a direct collision course with Sigerson, Freshers and second level football competitions. Sigerson will be completed in the month of January at the very time when county U20 squads are at the height of their championship preparations.

“Freshers football is also being played at the same time as the U20 championship, while the provincial second level schools’ competitions are also at the business end.”

Whereas not going into the same detail, Leinster CEO Michael Reynolds is also critical in his annual report to convention.

“The U20 scene suffers greatly from a governance perspective, or rather lack of same. To me, it appears that at this age grade we vote one way and subsequently act another.”