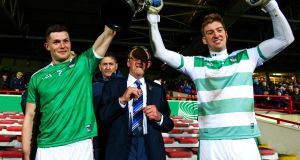 Limerick’s Iain Corbett and Donal O’Sullivan with the McGrath Cup after the victory over Cork at the LIT Gaelic Grounds in Limerick. Photograph: Ken Sutton/Inpho

Limerick’s first McGrath Cup win in the 15 years since they completed back-to-back titles in 2004-05 came as a welcome relief for manager Billy Lee after a difficult couple of years, which starkly contrasted with the county hurlers’ return to the big time.

The final win over Cork, who had inflicted an extreme 3-18 to 0-6 defeat on them in last year’s Munster semi-final, came as a cheerful start to Lee’s fourth year in charge but he was realistic about the achievement.

“The pre-season competitions aren’t as important but you get a chance to try out players. The bit of silverware that came with it is great for anyone in the background and not just the footballers but the academy, the county officers, sponsors and supporters. It shows the worth of the work being done.”

For a long time, Limerick’s graph has been in decline. Since gaining promotion to Division Three seven years ago, the county has slipped back in the league each year and finished last season second last in Division Four.

Since then things have picked up even if an unexpected win over Tipperary in last year’s championship led to the disappointment of the semi-final hammering.

Lee doesn’t believe that Saturday’s setback will derail Cork’s momentum built up over the past 12 months.

“I think they’ll come and hopefully they will because a lot of good work has been done down there notwithstanding what happened at the weekend. That wasn’t the team we played in the championship!”

He’s hopeful that his team can now mount a sustained challenge in the league to try and exit the bottom tier. Injuries and a couple of departures from the panel won’t help that campaign and he understands the reasons why players rethink their commitment to the inter-county game.

“This happened in the past but it’s getting called out more now because it’s being put in the context of the commitment side of it. In my view that has gone too far at this stage in terms of what is expected of people. I’d put it this way: you and I can ask our boss for a day off and you’re likely to get it for a special event.

“You nearly can’t ask a county manager for a night off training because there’s something coming up. That’s not right. I’d have fellas coming up to me and I say, ‘what’s the problem?’ and let them off because what’s being forgotten in all of this is that players are individuals, humans with a life outside of the sport.

“Yes they understand the level of commitment when they come in but things happen in life that you can’t plan for and they have to feel they can approach a manager. Life is tough enough and having happy players is worth its weight in gold. It guarantees you nothing except players who know they’re being respected!

“People think it’s different now but it was always a tiny number of counties that could expect to win All-Irelands. There is pressure on less successful teams because of the money that’s being invested and expectations rise but ultimately everything has to come back to where you are in the pecking order.”

The GAA confirmed on Monday that Cork referees Colm Lyons and Conor Lane would take charge of Sunday’s AIB All-Ireland club finals at Croke Park. Lyons will referee the hurling final involving Ballyhale Shamrocks and Borris-Ileigh at 2.0 whereas at 4.0 the meeting of football champions Corofin and Kilcoo will be officiated by Lane, who also took charge of last year’s All-Ireland replay between Dublin and Kerry.

Galway centrefielder Fiontán Ó Curraoin, who was taken to hospital during Sunday’s FBD semi-final win over Mayo with a head injury, was discharged later that night. The injury caused a hold-up of nearly a quarter of an hour in the match, won on penalties.