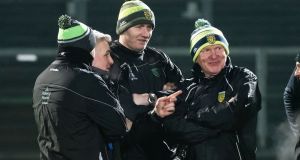 Donegal manager Declan Bonner with his backroom team ahead of the win over Derry on Wednesday. Photo: Evan Logan/Inpho

Donegal will not be fulfilling Sunday’s Dr McKenna Cup semi-final against Monaghan.

A clash with the opening round Sigerson Cup games has left Donegal unable to field a team.

The decision was confirmed by Donegal manager Declan Bonner following a meeting with his backroom team on Thursday evening in Convoy. The conclusion, the Donegal manager said, was ‘regrettable’.

Donegal are without 13 players, who will line out for their colleges, while the Tir Chonaill captain Michael Murphy is manager of the Letterkenny Institute of Technology team that will face Athlone IT in the Sigerson Cup.

“Whoever fixed the Sigerson in the middle of this, it is absolutely ridiculous. We have to manage that and be careful of player welfare and we just won’t have the numbers to field.

Following Wednesday’s win over Derry, Donegal county secretary Declan Martin wrote to the Ulster Council asking that the game be put back by 48 hours. Down, who are due to play Tyrone in the other semi-final, made a similar request.

However, the Ulster Council insisted that the games go ahead as scheduled.

“When drafting the fixture schedule following the draw on 4th December, the committee and counties were fully aware that the First Round of the Sigerson Cup was also scheduled for this weekend of 11 -12th January,” the Ulster Council said.

“The committee also considered the welfare of players and took the view that from a player perspective, it would be unfair to expect players to play in the Sigerson Cup on Sunday 12th and line out for their counties on Tuesday 14th.”

Donegal have been in experimental mode so far this year, although Bonner has used a number of his first-choice players.

However, their squad is seriously depleted heading into the weekend.

“We only had 23 players togged against Derry,” Bonner pointed out.

“We didn’t fill the 26 and it’s very difficult. I’m not going to go around now and ask club players who have done no work to fill numbers. We’ll wait and see.”