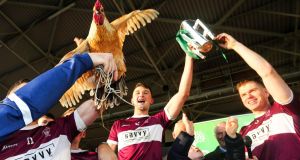 Paddy the cockerel joins in celebrations after Borris-Ileigh’s victory over Kiladangan in the Tipperary SHC Final at Semple Stadium back in November. Photograph: Lorraine O’Sullivan/Inpho

Borris-Ileigh should – and do – have bigger things to worry about besides trying to smuggle a cockerel into Croke Park for Sunday’s AIB All-Ireland club hurling final. But when it’s only your second final, and first since winning the title outright in 1987, old traditions can go a long way.

Better known locally as Paddy the cockerel, the unofficial feathered mascot has been ever-present on the sideline as Borris-Ileigh has revisited that run of over three decades ago – first in Tipperary, then in Munster, and now in getting back to Croke Park.

They meet defending champions Ballyhale Shamrocks, the Kilkenny club with a record seven titles, including five since 1987. Despite the county rivalry, it’s a first club hurling final between Tipperary and Kilkenny, and the way Dan McCormack sees it there’s no harm in keeping old traditions alive.

“As far as I know it goes back to the 1940s,” he says. “It’s on the [club] crest as well, and the story was told after the Munster final, how there was a man who used to sell merchandise outside the church up in Ileigh and he had cocks with him and he used to walk the cocks to the matches with him.

“Borris were going well at the time and began to become known as the ‘Cocks of the North’ because we are in north Tipperary. And ever since the whole thing caught on, and any time there’s a big final there is a cock out. You wouldn’t often have the chance to see it, it’s 33 years since we got to a county final or won a final.”

At age 26, McCormack, like most of the team, wasn’t around for that first All-Ireland run in 1987. One of four brothers on the team, along with goalkeeper James and defenders Seán and Ray, he does however live and breathe the club, still teaching in the parish at St Joseph’s Secondary School.

“A young fella in first year inside in the school looks after him on matchday, Eamonn Groome, he gets the job. Usually before a county final or Munster final or a big final they walk him out on the field with the parade and he’ll be around the place. I have a feeling someone is going to have to come up with some little plan to get him into Croke Park, and I’m sure there’s no better man in Borrisloeigh to do it.”

There is,however, also a more serious side to Borris-Ileigh, especially in the way the closed out their semi-final earlier this month over Galway champions St Thomas’; Brendan Maher defying weight and gravity to hit one of the defining points with a half-broken hurl.

McCormack knows about Maher’s skill-set better than most, lining up beside him at club and county level, and Sunday’s return to Croke Park also brings back fresh memories of their All-Ireland win over Kilkenny, McCormack starting at wing forward.

“I wouldn’t say everybody is shocked, but they are in awe of him [Maher] at the moment in Ireland, but we have seen him put in performances like that for Borris the last 10-15 years. They probably wouldn’t have been on in the national media but I remember Brendan’s first game for Borris when he was 16 and he scored three points in a North final. Nothing really comes as a shock anymore.

“He scored an unbelievable point against Ballygunner off the left side and we thought that was the pinnacle until he did that [against St Thomas’]. I’d find it hard to hit it with the full hurley off the left side and he does it with half a hurley. He’s just in a rich vein of form and hopefully it continues.”

Though starting at midfield, McCormack has also been acting as a sweeper should Maher break forward: “I suppose Brendan originally sits at centre back and he’d often make a move up field because with the way Brendan is hurling, teams obviously try to pull and drag him left and right and move him around the pitch.

“So if ever Brendan does go attacking the game I just kind of slot in behind, and obviously no team wants to leave their whole centre open, to protect the full-back line some bit and it’s happened once or twice throughout the year.”

Although a first final for this team, manager Johnny Kelly has also been here, done that, with Portumna: “He’s the mastermind, thinking of all these little ideas of getting over the line, has often talked about his different experiences with it,” says McCormack.

“We’re also lucky in a sense that we’ve started the same 15 from the county quarter-final – we’ve had no injury which is very unusual for a club team to have. That’s unusual to have the same first 15 six times on the trot. We got a huge amount of momentum, won a county final and I suppose it all kicked off from there.”