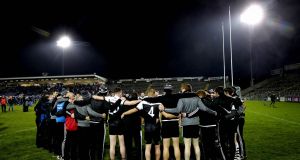 It’s the ordinariness that makes it special. For sure it sounds like a pastoral idyll, Kilcoo tucked into the foothills of the Mourne mountains and relatively forgotten during the violent decades. And like so many parishes on this island it relies on Gaelic football for its heartbeat. But they make no mad claims about it. It’s just the wee place at the bottom of the mountain. “Ach there is a village,” clarifies Caelan McEvoy.

“You start at the pub and you get the chapel and shop and drive on a mile and there is another pub and then you are out of it.” It moves to its own time-beat. “You go to mass, have a few sheep and that’s about it,” Aaron Branagan, one of five players from that household,” said in his post-match interview on RTÉ when they were Ulster champions. They’ve made some fun out of that, firing up images on social media of this herd or that. They’re fiercely serious about this year and have the good sense to know how to enjoy it too.

“It’s been a good year,” Conor Laverty tells you down the phone. He apologises for the background noise of young children in high spirits. He’s just in the door from work. “We are probably in the shape of our lives. We’d been trying for a number of years and couldn’t get over the line. Ulster’s an extremely tough province to get out of. We are very lucky but we have worked extremely hard.”

They’ve not really had time to investigate why this year has been different. Why over this long autumn, they’ve steered themselves through games that were eminently lose-able. Make no mistake, Kilcoo are bluebloods in the Down ascendency, with 17 titles. Eight have arrived since 2009. That year re-awakened their winning habit which had mysteriously stopped in 1937.

“Emigration is what people will tell you,” Michael Kane, the club vice-chairman and general do-er explains for the abrupt halt in titles. “In the 1940s and 1950s people were going to American and England. Maybe standards slipped too.”

The revival was slow burning. Kane instances the 1998 minor title, the climb from division three in 1996 to division one in 1998 as significant. They’ve won seven of the last eight Down championships but until this year couldn’t find a path through Ulster. Conor Laverty is 34 now. Felim McCreevy is 33. Niall McEvoy is 34.They knew their chances were finite.

Against that, Ryan McEvoy, a brother of Caelan’s who has been lighting up the winter, is just 19 and the core of the team are young. Kane reckons that the senior All-Ireland winning seasons in 1991 and 1994 when Down were the last word in summer glamour triggered something in Kilcoo, too.

“Young people looked up to those teams and it revived the interest and our club put a lot of good men in place. We had to look at underage structures. We put those in place and got the right people in charge.”

Still, plenty of clubs have done that without experiencing the kind of fantastical adventure that this winter has been for Kilcoo. There’s no doubt that the arrival of Mickey Moran has been crucial to them.

“He was our number one target and we didn’t speak to anyone else,” Conor Laverty says of the policy in recruiting the Derryman. Moran is a constant in Ulster football, nimbly moving through the shadows and leaving a legacy of brilliant work behind him. Kilcoo have had other fine managers – Jim McCorry and Paul McIver both brought the club to higher levels. But Moran has been a magus in places like this.

“Probably just his record in Ulster. We had come up against him a few times. We had a lot of respect for the man and we felt we could add that something-that-was-missing to our team,” said Laverty.

Caelan McEvoy has had the opportunity to study Moran close up, working in the backroom team along with his dad. “Mickey is just very calm. Nothing is ever stressful. It is all relaxed – to be honest, as a lot of the boys said, he is like a granddad to the squad. He comes and goes and settles them down and you go and have your wee talk with them. Some people think he is very quiet because he doesn’t’ really talk to the media. But he is actually good crack . . . he’s a very witty man so he is.”

In a fairer world, McEvoy would be in the squad, trying to impress Moran. He is still just 22 and has managed to squeeze in an under-14 title with Kilcoo followed by interrupted years of minor and under-21 football and a senior squad place in between two episodes of serious illness.

Conor Laverty was his under-16 coach and noticed him looking unwell before a championship game against Downpatrick in the summer of 2010. McEvoy, terrified he mightn’t be able to play, insisted he was fine. Laverty called his parents anyway.

The boy was raging with the coach at the time but then things took a grave turn. Hospital. Tests. Serious faces. A liver transplant. And then the worst news: You can’t play football again Caelan. That was the worst. He refused to accept it and set about training himself back to health. Again, Laverty noticed. He was a Down senior player at that time but he began taking McEvoy for dedicated sessions. Seven months after his operation, he was playing for Kilcoo again. There have been over a dozen operations and transfusions since but through that, he somehow made it to the senior squad.

“I was starting my senior season under Paul McIver and I took sick again just completely out of the blue, Took a reaction to something in my blood.”

“ I’ve been on the road to recovery since then. And aye, its been a tough road.”

This is delivered without an ounce of self pity. His attitude makes the others stop and think, though. Kane remembers a mass said for McEvoy this time last year when he was in hospital in London. “It wasn’t looking great for him then. But he’ll be in Croke Park on Sunday setting out cones.” In ideal circumstances, he’d be warming up too. Caelan had the skills.

“Obviously his brother Ryan is a class player,” Kane says. “Caelan would be a more nippy sharp player in front of goal but never got that chance to progress in terms of strength and conditioning.”

“Och yeah it is. It breaks your heart some nights when you go down to the pitch and you see them all out there playing. But there’s a sense of satisfaction with that when you see them boys winning. They put equally as much to get to where they are today so it is a pleasure watching them. There is no . . . there is a hint of jealousy that they are getting to do it but I will get my day so that is just something to look forward to.”

It’s been the strangest turn of year in Kilcoo: a giddy Christmas governed by football. The players – happily – didn’t really have a Christmas. “But for the community, its been like the longest Christmas we have ever had,” says Kane. It’s only a ninety minute drive from Kilcoo to Croke Park but they know it may be a once in a lifetime journey. Can they win this? Yes, the odds are against them. Corofin have been All-Ireland champions for the past two years and are one of the most formidable and classy sides to ever take to a football field.

“They’re right up there with the best club team that has ever been,” Laverty says quietly. “We have great respect for them and they play a great brand of football.”

Don’t for a second think they don’t believe. Whatever combination of excellence, dedication and clarity of purpose and just that mysterious unidentifiable otherness has taken hold of Kilcoo, they are going to wring everything from this Sunday. When you live at the bottom of the mountain, you appreciate the view from the top.

1 Questions raised over Ireland v Italy fixture due to coronavirus
2 Six Nations: No place to hide for Ireland’s misfiring captain
3 Panorama show Mo Farah changed account to anti-doping investigators
4 ‘Ireland’s honeymoon period is over’ - buoyant English press reaction
5 All in the Game: how Firmino’s agent made him faster . . . on his laptop
Real news has value SUBSCRIBE

Northern Irish FA ban children aged 12 and under from heading footballs 15:18
Panorama show Mo Farah changed account to anti-doping investigators 14:41
Jack Conan returns to full training ahead of schedule 14:24
Irish Olympic hopefuls fly back from Italy amid coronavirus outbreak 14:12
All in the Game: how Firmino’s agent made him faster . . . on his laptop 14:00
Crossword Get access to over 6,000 interactive crosswords