Liam Cahill’s side were impressive in their victory, holding out to win by a point 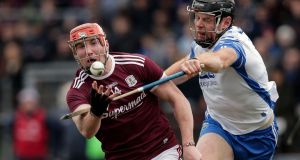 It ended like the last sandbag holding out against the flood warning and just about kept Waterford on dry land. Too close for comfort – a performance nonetheless greeted with a suitable roar of approval from the home crowd at Walsh Park.

It also keeps Liam Cahill on a dry run of sorts, a third league victory in three games for the Waterford manager since coming in from his native Tipperary. When it’s a team like Galway you’re holding out against, if only by a point, that’s good enough for now.

The afternoon also held dry and even if a long way from summer hurling it’s pointing that way for Cahill: Waterford haven’t won a championship match in three years now, and results like this – Galway twice denied an equaliser at the death – won’t harm the belief and intent to end that wait.

“It’s great, absolutely brilliant,” said Cahill, their game against Limerick postponed last weekend because of the wet conditions. “It’s always pleasing to win tight matches, and I’m delighted to hear the Waterford roar at the end, that’s what it’s all about. As I said from the start, when the Waterford people look out at a hard-working team I don’t think they’ll have too many complaints. They’re enjoying it and please God we’ll continue to do that.

“You have to take the wins when they’re there for the taking. But also the manner in which they’re digging out results as well. We’d a bit of luck on the day, Galway left a few chances behind them, so again pleased with Waterford’s battling qualities, and composure, to see the game out. All credit to Galway, they were up for the battle. We were five points up and they asked lots of questions of us, which is great.”

Galway were left asking some questions of themselves too. Joe Canning, originally named to play, didn’t travel because of a calf muscle strain and in truth his absence was felt when Galway were sniffing around for that equaliser – or potential winner – in the closing stages.

They’d come from five points down on 50 minutes, 0-15 to 0-10, to square it up again with a minute to play – 0-16 apiece – after hitting Waterford with four unanswered points. Suddenly in danger of sinking, Waterford replied with an excellent point from replacement Peter Hogan. Jason Flynn nearly replied again, his shot rebounding off the posts, before the last shot at goal by Galway’s Sean Loftus drifted right and wide.

With nine different scorers, Pauric Mahony still leading the way with his 0-8, including two from play, Waterford certainly earned the win, edging three points clear just before the break, having played the first half with the wind. Galway did drift out of the game for a while in the second half, but still finished like that rising tide, and that was good enough too for their manager Shane O’Neill.

“We could (have won it), at the end, we had two chances, one hit the post and the other drifted wide,” said O’Neill, also in his first season as Galway manager after coming in from his native Limerick. “We went five points down, looked like we were struggling, but we drove on after that. Waterford seemed to be clinging on at the end, but I was saying to the boys inside that there’s a tendency to look at what happened in the last few minutes, with the post and so on, but the five minutes before half-time was what really got us.

“We allowed them to go three ahead when it was level, we just seemed to tune out. We lost our bit of structure, which we had kept fairly well for most of the first half. That seemed to be the difference in the end.”

It kept the crowd of 3,652 well tuned in, despite the strange lack of goal chances: level seven times in the first half, Waterford came closest to raising a green flag.

“I don’t know what it was like from a spectator point of view, there were some mistakes, but it was exciting, as close as it was,” added Cahill. “We’d a couple of goal chances for Stephen Bennett, Patrick Curran maybe had a chance to take it a bit further on, but Galway didn’t create many chances either. It was just one of them games.”

Billy Nolan, in the Waterford goal in place of Stephen O’Keeffe, didn’t have much to worry about, his long puck outs leaving a good impression nonetheless. Austin Gleeson also made his presence felt in the second half, once diverted to centre back, with the old guard of Kevin Moran and Jamie Barron holding fort too. There wasn’t a flood of freshness about the Waterford team but spirits are rising again nevertheless, Colum Lyons and Conor Prunty also showing well in defence.

Galway shot nine wides in the first half, into the wind, Conor Cooney and Niall Burke definitely enjoying better games, while Conor Whelan and Cathal Mannion shot 0-7 from play between them. Tadhg Haran, Shane Cooney and from the bench Evan Niland and Conor Walsh put down further markers but there’s no denying the sort of magic that Canning might have conjured up to level it simply wasn’t there on the day.

Still O’Neill has now used 30 players in three league games, again all with summer hurling in mind: “The main thing is to win but we’re at a pitch where we’re trying to create as competitive a squad as we can, and we’re using the league for that. It’s all about the championship. We’d have liked to win today, we had the chances to win it and the boys are disappointed they didn’t, but it isn’t the end of the world. We’ll drive on for the next two weeks.”

Next up for Cahill is a visit to his native Tipp: “Yeah, another great chance for us again to see where we are at. Hopefully that’s a league quarter-final, worst case scenario, and that’s a really good opportunity again to get a real competitive game a few weeks out from championship. And we get the chance for a league semi-final or final we’ll go at it all guns blazing.”

Angling Notes: No specific restrictions yet on recreational angling 00:00
Stephen Kenny in for ‘unprecedented’ first year as Ireland boss 19:55
Premier League clubs may take wage cuts into their own hands 20:02
Dermot Cantillon has ‘no regrets’ about Seanad bid 18:23
Potential Robbie Keane exit could prove costly for FAI 17:58
Crossword Get access to over 6,000 interactive crosswords