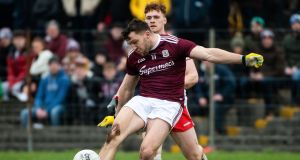 Sometime after 3pm, the truth dawned. Galway are All-Ireland contenders. The cat is out of the bag. Not favourites, certainly, and outsiders maybe but they have the right stuff. Padraic Joyce’s high flying birds visited the heaviest defeat on Tyrone of the Mickey Harte era in what was a nightmarish day when the Ulster team were, as Harte said, ultimately “massacred”.

Tyrone’s task was made severely difficult after Kieran McGeary was wrongly red-carded after 28 minutes for what was a heavy but fair shoulder challenge on his opposite number Eamon Brannigan, who went on to kick three sprightly second half points. More seriously, they lost their totemic full forward Cathal McShane with an ankle that is either broken or dislocated. When Frank Burns was sent off for a second yellow after 59 minutes, the flood gates opened and Tyrone had neither the resources nor the energy to stem a rush of Galway scores from a home team who gave an exhilarating attacking exhibition.

“I didn’t envision 19, I would have envisioned winning the game definitely by a few points with the way that we are playing,” Joyce said afterwards.

“We took last week off because we had trained for about five weeks, took most of last week off, did a little bit Thursday night. They came in training Tuesday night and the freshness and desire that they showed Tuesday night was fantastic. We’re in a good place, I know that you can say that it is great hindsight but I knew that we were going to give a good performance today and what a place to do that, in the spiritual home of Galway football with great support again. But I always tell the lads that they have to give reason for the supporters to start following them.”

A total of 2-25 is a pretty good advertisement. Weirdly, this was a competitive afternoon until the last 20 minutes in front of an enthusiastic home crowd. Their front six shimmers with creative energy and accuracy: they are a handful. They have a virtuoso in Shane Walsh – 1-8 today, including a penalty– and an outlier in that category in Michael Daly. Whereas before, Galway’s attack was channeled through the mighty frame of Damien Comer, now nothing is. Instead, Comer pops up in various guises: a midfield ball winner, a poaching corner forward and a wrecking ball, winning a 50th minute penalty. The gung-ho leading man stuff was gone and pound for pound, he was Galway’s most efficient performer. Ronan Steede brings a new dimension and long-range potency to midfield and his Corofin team mate Liam Silke was touch-tight on Peter Harte at centre-back and blotted out Tyrone’s playmaker.

Tyrone struggled with Galway’s press and its hard to remember Niall Morgan having a more stressful league afternoon with his restarts. The sight of Morgan gamboling forward and electing to shoot for a long range point after half an hour was indicative of the dearth of options for Tyrone. They trailed 0-12 to 0-6 at the break whereas all six of Galway’s forwards had scored from play by half-time.

And yet, and yet. You can be sure that some part of Joyce’s mind will be warning him not to fully trust what he saw here. Twice in the first half they were opened for goal chances for Colm Cavanagh and McShane, who flashed a shot over the bar that should have been directed low. And there was a sense that if Tyrone had managed to break through the initial wall of pressure, more scores were there. And there is also the fact that Tyrone, down a man and malfunctioning and nowhere near their summertime state, clawed their way back to make it a three point game after 50 minutes, 0-14 to 0-11.

By then, Joyce had sent in Paul Conroy, a sure sign that Galway wanted a schoolmaster to quiet a rowdy classroom. A minute later Comer, bursting through along Morgan’s left touch line, won that penalty. Walsh converted flamboyantly. Tyrone folded the tents mentally then and that score was the start of an unbroken run of 1-8 for the home team. Galway weren’t showboating here but had become so dominant in possession that the chances just opened up. Burns’ second yellow was borne of despair: he threw himself at Walsh, who was gliding downfield with all kinds of options opening up for him. Afterwards, Joyce and Harte stood chatting together amicably for several minutes. There’s clearly a lot of mutual respect there and you got the sense that Harte may have figured that he was witnessing the start of something real.