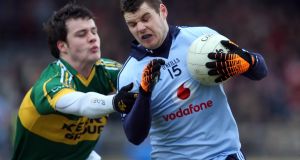 Dublin’s football decade may be defined by the seven All-Ireland titles won and last year’s completion of an unprecedented five-in-a-row, but the county’s league form has also been remarkable if not as high-profile.

From 2010 until now, Dublin have lost just 16 fixtures out of 84, less than 20 per cent, a record of spirit-level consistency in a competition frequently characterised by trialling new players and getting over one championship or ready for another

At the dawn of 2010 football was dominated by Kerry and Tyrone, who had shared the previous seven All-Irelands between them. In the league that started 10 years ago this month, Dublin fired the opening shots in what would turn out to be an extraordinary decade by defeating both counties to top and tail their best league since the 1990s.

Its influence on the county’s championship exploits is clear in the mind of Paul Griffin, whose career spanned the last two decades before a cruelly timed injury in 2010 kept him out of the 2011 All-Ireland win and, a year later, prematurely ended his days in the county jersey.

He started 2010 as captain for what would be a hugely significant campaign for the team.

“The previous year had been the second one in succession that we had exited the championship on the back of a hiding. Tyrone and Kerry came into the All-Ireland quarter-finals through the qualifiers and we were expected to perform a lot better than we did and we ended up getting destroyed by both of them.

“The fact that it was a second year meant that we couldn’t write it off as ‘an off day’ or ‘one of those things’. There was a lot more acceptance from Pat [Gilroy, then in his second year as manager] and the playing group that winter that we needed to be more robust and able to stay in games.

“We could no longer be a team that was competitive and capable of beating anybody if we were playing well but if it started to go against us, we had nothing to fall back on.”

The year opened with a trip to Killarney to face Kerry, their tormentors from the previous summer. Dublin hadn’t won away in the fixture since 1982, but attitudes as well as personnel had changed in Pat Gilroy’s team. The two-point win in Fitzgerald Stadium put a halt to a bad run in the league against Kerry.

“A couple of times when we were in a good position to beat them, we just didn’t close it out,” said Griffin. “A year previously we were winning reasonably comfortably and ended up just drawing the game, which felt more like a defeat at the time. That win validated our approach.”

That was largely built on work rate and application as well as the introduction of such influential players as James McCarthy, Michael Darragh MacAuley and Kevin McManamon, but also on an appreciation of what they had been doing wrong, according to their captain.

“We had been guilty of maybe saying one thing as a group and not quite living it; talking about how hard we would work to get the ball back but not doing it collectively; behind it all, regarding defence as something the back eight did whereas it was the job of the front six to score. That caused a disconnect in terms of the necessity for all 15 players to get the ball back and then generate attacks and scores.

“Kerry and Tyrone were the dominant teams in that era and they were exceptional on both sides of the ball and really pushed you, both in terms of how hard you had to work to get the ball out and generating turnovers farther up the pitch. Similarly, there was the belief of their defenders to come up looking for scores.”

Beating Tyrone at the end of the 2010 league in Omagh wasn’t quite enough to get Dublin into a first final in 11 years, but it did condemn Tyrone to relegation – a surprising result that was repeated later in that summer’s All-Ireland quarter-finals.

“That season signalled a move away from the really inconsistent nature of our league performances. In the previous 10 years they had been all over the shop. That variability in performance made it very difficult to take much from the league – unlike Kerry, who in that period were always there or thereabouts, and it showed in the championship.

“We established that consistency in 2010 and got to the league final in 2011. Since then, with hardly any exceptions, that has been maintained.

“One thing that’s permanently changed and remains a characteristic is that they are exceptionally strong, collectively. Look at the Monaghan game recently. It’s Davy Byrne who comes up and kicks the point.”