Westmeath reel Armagh back in to salvage a draw 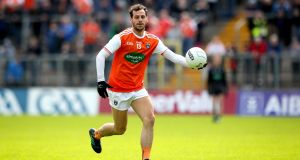 Despite leading by an unflattering eight-point margin at half-time, Armagh needed a goal from sub Jamie Clarke in the 70th minute to earn a share of the points with Westmeath in a pulsating game in Mullingar.

The visitors had the aid of a slight breeze in the first half and they led by 1-5 to 0-0 with just 10 minutes elapsed, the goal a slapped effort from close range by Rory Grugan at the end of a great move in the fourth minute. A John Heslin free settled Westmeath somewhat, but they were overly dependent on Luke Loughlin for attacking inspiration. Niall Grimley and Oisín O’Neill continued to lord the midfield area, and Kieran McGeeney’s charges were full value for their 1-12 to 0-7 lead at half-time.

Jack Cooney’s troops were a changed outfit in the second half. Heslin converted an early free before a quickfire brace of goals totally transformed the contest. Heslin scored the first with a superb strike from the penalty spot in the 41st minute after Callum McCormack’s shot had been foot-blocked. Within a minute, Denis Corroon slapped the ball home from close range. A wonderful solo point from corner back Boidu Sayeh then levelled the scoring.

Westmeath picked up two black cards – Sam Duncan (48th minute) and James Dolan (54th minute) – either side of which the dynamic Loughlin scored a great goal to put his side in control. The home team looked the likely winners when they led by three points (3-12 to 1-15) approaching the end of normal time. However, a cautious approach backfired when Jamie Clarke pounced for the equalising goal. Neither team could add to their tallies in five minutes of added time, with Ray Connellan spurning the best chance from a 40-metre ‘mark’.

1 Royal Portrush: Golf clubs ‘in real distress’ as eyes turn to 2021
2 Colin Kaepernick’s exile is too fresh for NFL to speak out on US protests
3 Vincenzo Iaquinta sentenced to two years in prison after mafia trial
4 Ghosts and goalposts: The soul of street football in Dublin’s Gloucester Diamond
5 Connell losing touch with club championship is real tragedy of Normal People
Real news has value SUBSCRIBE