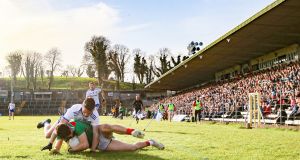 Mayo’s Oisin Mullin is tackled by Shane Carey of Monaghan during the Allianz Division One clash in Clones. Photo: Tommy Dickson/Inpho

For a team that have had bones of the obituary about them, following on from last summer when their championship ended prematurely to Armagh, Monaghan have concocted a pleasant mix of grizzled experience and youth. And driving back down the road to the West, Monaghan’s ruthless edge in the closing minutes will haunt Mayo, most of all because they will have witnessed a familiarity in it. They have done this to so many others.

With Mayo’s Jordan Flynn seeing red for the second time this spring, Monaghan responded to their opponents’ indiscipline with the merciless mindset they brought to the opening 35 minutes in Croke Park a fortnight ago.

“We felt that we were in control of the game at the sending off,” explained Banty McEnaney after the game. “There was opportunities: we went three clear, it went back to two, we went three clear again, and then it was back to two. But we didn’t get enough of a foothold on it until 15 minutes to go.

“We have a duty to expand our panel. We needed to expand our scoring opportunities and our playing panel. And I think that has progressed nicely for us.”

It’s hard to disagree with the final point given Conor McManus had a relatively quiet afternoon by his high standards. However, paving the way for life without the Clontibert man in the future is Conor McCarthy who was able to carve the Mayo defence open like a butcher taking to a fresh batch of meat.

At the same time, it was surprisingly Mayo who started the stronger side.

Their fans, as is their wont, arrived early and keen, setting up camp in the middle of the Gerry Arthurs Stand, hungry as ever for this Division One fare. But Monaghan fans are bringing another strand of confidence in 2020. Shorn of Malachy O’Rourke after last season’s efforts, McEnaney has instilled renewed confidence in the side, putting paid to the notion that they’re over the proverbial hill.

The first half exuberance Monaghan showed in Croke Park a fortnight ago evaporated after the break then and it seemed, for a brief period after the throw-in here, that the hosts would struggle to bring the same hunger again. However, Mayo were playing with an intensity that has usually deserted them in the spring, highlighted in the fifth minute when they forced Rory Beggan to delay time from a kickout, forcing a throw-ball in front of the posts.

Ryan O’Donoghue pointed during the subsequent play before McCarthy finally got Monaghan off the mark at the other end. As tight as the scoreboard suggested the game to be, Mayo were playing more defiantly and pulled together an array of sublime points, most notably from Darren Coen and young defender Oisín Mullin.

Mullin was the epitome of Mayo’s desire in that first half, balancing multiple duties from dispossessing Monaghan runners through the centre to the thankless job of keeping tabs on Conor McManus, no small feat for a youngster still playing under-20 football. There was nothing neither Mullin nor his teammates could do about McCarthy however, especially when he angled a ball past a hapless Robbie Hennelly to give Monaghan the lead for the first time of the afternoon in the 25th minute.

They should, perhaps, have had another when Karl O’Connell burst through the middle, when despite being driven on by the white in Hennelly’s eyes he only managed to drill over a point.

Likewise, the same could have been said about Coen at the opposite end when Mayo attempted to produce the perfect reply to Monaghan’s goal. The full-forward was satisfied with the point. The fluid movement the visitors exhibited in the run-up to the score was menacing, and that being the case it whetted the appetite of a very healthy crowd for the second half, the first sun of the spring playing its part by staying out for the day.

Having gone in at the break all-square, Mayo emerged for the second robbed of the impetus they had been afforded earlier on. Niall Kearns delivered a clinker of a score off-balance to give Monaghan the first lead of the second half, one they’d never let slip.

Once Flynn found himself in familiar hot water, as he did versus Dublin, and heading for an early shower, the ball sweeped up the field where Kieran Duffy was waiting gleefully to palm the ball into an empty Mayo net. A stream of scores rained down over Mayo’s crossbar, Monaghan too clever not to make the extra man pay, and suddenly, it felt like Mayo were already boarding the bus home.

“It was a big moment but there were some signs before that as well,” admitted James Horan afterwards. “We weren’t playing well and Monaghan were getting on top before that sending off. We made too many mistakes.”

Unfortunately for Horan and his side, the team that boasts the longest continuous stay in Division One are in trouble once again. Back on the border, they’re motoring just nicely.