Corbett helps Laois edge over the line in Ennis 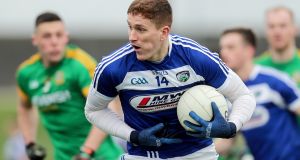 Evan O’Carroll: scored three points and had a hand in Laois’s goal against Clare in Ennis. Photograph: Laszlo Geczo/Inpho

Laois dominated for most of this Allianz Division Two football league game at Cusack Park Ennis yet had to withstand a late Clare rally to emerge with a single point win.

Having lost to Cavan in their last outing, Mike Quirke’s men came to Ennis with a point to prove. They began in positive fashion and thanks to a pair of points by corner-forward Evan O’Carroll, inside four minutes of the start, they laid down a marker. Clare got on the scoreboard via a Gearóid O’Brien score after he was set up by Alan Sweeney.

Half back Pearse Lillis made it a one-point game in the 13th minute before the O’Moore County took the initiative and forged ahead.

Colm Murphy and veteran Ross Munnelly kicked points before Murphy was in for the game’s only goal after 21 minutes.

Evan O’Carroll forced a save from Clare goalie Stephen Ryan with Murphy following through from the rebound. Murphy then fired over a point to put daylight between the sides giving the visitors a 1-6 to 0-2 advantage. Clare lost their goalkeeper Ryan to injury and he was replaced by Eamon Tubridy.

At the break, Clare trailed by 1-8 to 0-5 and looked very much off the pace of the game.

But their second half performance was much improved and by the 48th minute, they had reined in Laois to just three points, 1-9 to 0-9.

Poor shooting let the Banner County down, though. The introduction of Joe McGann into the Clare attack was an inspired move and though the youngster didn’t score, he did manage to earn a number of valuable frees.

Clare grabbed a goal from a penalty by David Tubridy and with five minutes remaining, they trailed by just one (1-11 to 1-10). Laois goalie Niall Corbett converted a ‘45’ but Clare hit back with a Eoin Cleary score.

Two injury-time Clare frees by Tubridy and Cleary were kicked wide and in the end Laois held on, to gain two valuable league points.