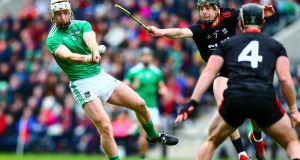 Limerick took another impressive step towards the Allianz Hurling League semi-finals with this third victory of the campaign in near ideal conditions at Páirc Uí Chaoimh on Sunday.

Watched by an attendance of 11,212, Kilkenny referee Seán Cleere was often at the centre of attention by regularly penalising both sides’ hand-passing and blowing for what appeared soft frees.

Limerick’s two-point winning margin reflected a much improved second-half performance from Cork, who wore a specially designed black jersey to commemorate the centenary of the deaths of former Lord Mayors Tomás Mac Curtain and Terence McSwiney.

Limerick bossed the first half, sweeping eight points in front at one stage, but Cork thundered back into the contest with a couple of morale-boosting goals on the resumption.

The first came after 42 minutes, when Shane Kingston raced through the heart of the Limerick defence and beat goalkeeper Nicky Quaid with a rasping shot.

Five minutes later, Cork were somehow level with a Patrick Horgan free made it 1-17 to 0-20, the home skipper accounting for a remarkable 0-17 of his side’s tally.

Substitute Aidan Walsh claimed the second goal in the 53rd minute, making a spectacular high catch from Horgan’s dropping free and slamming in an unstoppable shot.

That nudged Cork ahead for the first time, 2-18 to 0-21, but they would only add three points as Limerick responded to the challenge.

Before the hour Kyle Hayes nailed a point to ensure all Limerick’s starting forwards were on the mark, with the visitors supplying 11 scorers to Cork’s five, a tale in itself.

The rivals were level on three occasions coming down the stretch, Horgan completing his tally after 65 minutes to inch Cork 2-21 to 0-26, ahead only for Limerick to finish strongly.

Hayes levelled matters almost immediately before wing back Diarmaid Byrnes struck a wonderful 65 from near the right touchline.

On 70 minutes, Aaron Gillane made it a two-point game with his 13th point and Limerick saw out four minutes of added time.

At the outset midfielder Cian Lynch set the tone for the Shannonsiders with the opening point after just 20 seconds and by the end of the first quarter, Limerick had a dozen on the scoreboard.

Scores flowed from all directions as Cork could only watch their opponent’s exhibition of high-quality marksmanship.

Twice, Limerick compiled four scores without response to reflect their undoubted superiority, sweeping 0-8 to 0-4 in front by the 12th minute and then extending their advantage to 0-12 to 0-6 entering the second quarter.

One of the outstanding points came wing back Paddy O’Loughlin after 15 minutes, when Gillane picked him out with an outrageous crossfield pass from the right corner.

And if Cork weren’t experiencing enough problems, Gillane’s free-taking including four on the trot to leave eight points between the sides approaching the interval.

Horgan responded with a couple of his own, both greeted with mild applause as Cork trooped in 0-17 to 0-11 in arrears and in big trouble.

The pattern looked the same on the resumption, when Darragh O’Donovan grabbed a super point from the right, but Cork found renewed battling qualities to force Limerick right to the wire.