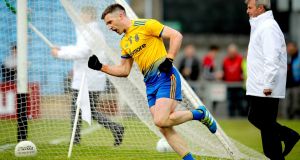 Cathal Cregg and Enda Smith hit the Kildare net in the last 17 minutes in Newbridge to breathe new life into Roscommon’s promotion challenge in Division 2.

Both teams entered this game with their respective seasons on a knife edge but with the win, Roscommon can look up, whereas Kildare now find themselves in a real relegation battle.

Despite the importance of this game, Kildare started very sluggishly and Roscommon scored four points in the first six minutes without Kildare making a tackle.

However, with the excellent Kevin Feely leading the way from midfield, Kildare played their way into the game over the remainder of the half and scored the next seven points. Adam Tyrrell was key to Kildare’s attacking play during that time, with Paddy Brophy and Daniel Flynn also kicking some fine scores.

The game ebbed and flowed over the next 15 minutes or so, but when Paddy Brophy landed his second point of the game in the 52nd minute Kildare led by 0-11 to 0-9 and seemed well placed to go and win the game.

It was not to be as they were outscored by 2-2 to 0-2 over the remainder of the game. Roscommon scored their first goal, and the first that Kildare have conceded in the league this season, in the 53rd minute, when Cathal Cregg was left with an empty net after a flowing move that involved the freshly introduced Conor Cox.

But when Niall Kelly halved that gap in the 59th minute the game was very much back in the melting pot going into the last 10 minutes.

The decisive moment came again when Roscommon were able to cut through the Kildare defence before Hubert Darcy’s run was halted just inside the square by David Slattery.

There was lots of pressure on the shoulders of Roscommon captain Enda Smith as he stepped up to take the penalty but if there was any nerves he hid them well as he confidently sent Mark Donnellan the wrong way.

Daniel Flynn pulled back a point for Kildare as they tried to build a comeback but any momentum they were building was halted when Donnellan put a free kick from the 45 metre line wide of the post.

There were seven additional minutes played at the end but the only score came from Roscommon’s Brian Stack as an immediate return to Division 1 remains a possibility.