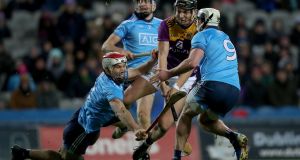 Wexford showed boundless character to bounce back with a late surge of scores and snatch a dramatic injury time victory over Dublin in their Allianz Division 1B National Hurling League game at Croke Park on Saturday evening.

Wexford Manager Davy Fitzgerald was happy to take the two points but not with the overall display, he said: “Those lads showed heart and guts, they will never give up.

“Overall though it was a sloppy display and we only imposed ourselves in the closing minutes. Still they came through with boundless character, for we had the sending offs and injuries, but right now we’ll take it and look to our final game with Carlow.”

Neither manager was committal on the referee with the Wexford statistics showing a total of 50 frees, 13 yellow cards and three reds during the course of the match.

Dublin Manager Mattie Kenny said: “We’ll take a lot of positives from the game. We’re really disappointed to have lost the game but nevertheless it was a good performance.

“We controlled the game for long spells, going into the last few minutes led by three to four points. Both sides were down to 13 and the game opened up but we could not get the extra scores. To concede the goal late on was disappointing. We now look forward to Clare next weekend, when we will give other squad players an opportunity. That was our idea for the league from the start.”

With the hard working qualities which Fitzgerald has always brought to his teams on show, it was Wexford who set Croke Park alight in a dramatic finish.

Down to 13 players, they came from two points adrift to stage a dramatic finale with the two-point victory securing their quarter-final spot.

But all the drama was packed into the closing stages of what up to then had been quite a scrappy encounter, dominated by the card showing of referee Johnny Murphy.

Murphy left both managers looking animated following some of his decisions, particularly when a third red card followed one minute from the end of normal time - Dublin fullback Eoghan O’Donnell receiving a second yellow. Dublin also finished the game with 13 players, Chris Crummy going off injured in the closing minutes.

As the game moved into additional time man of the match Rory O’Connor struck over a splendid point to leave the minimum between the sides, but when Ronan Hayes extended Dublin’s lead back to two points, the home side looked secure.

Then came a dramatic run and goal from Wexford substitute Jack O’Connor three minutes into additional time - followed by a Paul Morris point - leaving Wexford leading 2-13 to 0-17 with a little over one minute of the additional time remaining.

Dublin staged a late attack but Paul Ryan saw his shot saved by keeper Mark Fanning with Cian Boland knocking the rebound over the bar, but it was Paul Morris who closed out the scoring with a pointed 65.

There were times through the first half when the hurling was scrappy with both sides missing scoreable frees, both Lee Chin and Ryan being off target with efforts.

It was Dublin who still had the better of that opening 35 minutes, for it was only a Mark Fanning goal from a 31st minute penalty, which seemed a harsh call, that kept Wexford in contention. Dublin finished the half strongly with points from Rian McBride, two, Donal Burke and a Ryan free to lead 0-10 to 1-5 at the break.

Dublin still enjoyed the better of the second half with Wexford eventually getting their game together to turn in that thundering winning finish.