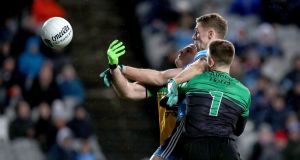 Dublin’s Paul Mannion scores a goal despite the efforts of Neil McGee and Shaun Patton of Donegal. Photograph: Bryan Keane/Inpho

Having drawn three of their previous four matches at Croke Park, Dublin just about got over the line in Croke Park on Saturday night, inflicting the narrowest of defeats on Ulster champions Donegal before a crowd of 26,153.

It was a lively and entertaining encounter at the end of which Donegal, steered forward by Michael Murphy, were a little unlucky to finish empty-handed. A final attack in the 78th minute – and referee Maurice Deegan could have played a bit more – came to nothing when Daire Ó Baoill over-hit a hand pass which was gratefully hoovered up by the covering Aaron Byrne.

The key score for Dessie Farrell’s team was a 66th-minute goal by Paul Mannion, who gratefully forced the ball into the net off Neil McGee after Donegal ‘keeper Shaun Patton had fumbled a point attempt from Brian Howard which dropped short. That pushed Dublin a goal ahead, 1-14 tom 1-11 – the first time all evening that they had led.

That reflected how badly it had started for the All-Ireland champions, who were 1-1 to nil down after six minutes. A Ciarán Thompson free, followed by a goal swept in by Hugh McFadden at the end of a surging run, set up by Michael Murphy’s pass after Brian Fenton had fumbled and lost possession over the sideline.

Dublin’s trouble on the scoreboard was just reflective of in-play difficulties. Craig Dias was understandably struggling to keep on terms with the athletic Mc Fadden – he had been a surprise announcement to make a first start since Pat Gilroy’s time – and Murphy and Jamie Brennan were setting off alarms every time Donegal attacked.

Dublin’s own early attempts to get into the match frequently came unstuck on slack use of ball and some poor support play as Donegal forced their attacks wide.

The first of Brennan’s two points in the 20th minute must have awakened long dormant nightmares.

Patton’s kick-out – the ‘keeper’s restarts were excellent all the way through, making his late lapse for the goal a pity – was flicked into space by Murphy and in an almost carbon copy of the move that undid Dublin early in the second half of the 2014 All-Ireland semi-final, Ryan McHugh sped onto the ball and a 1-2 with Brennan opened the goal opportunity.

Evan Comerford saved well but Brennan scooped the rebound and fisted a point so that the move didn’t go entirely to waste.

The Dublin goalkeeper, minding the house for Stephen Cluxton this campaign, made three fine saves, the one in the 59th minute from Patrick McBrearty a genuine match saver after Eoghan Ban Gallagher had run at the defence, exchanged passes with Niall O’Donnell, and passed to the Kilcar forward, who was making a first appearance of the season off the bench.

Dublin’s revival – something of a staple in these league nights under lights – was built on tightened accuracy in the forwards. Seán Bugler maintained the good impression he has made in the last 12 months with two good points and a hard working display at wing forward.

His was the first of three points just before the interval – the others from a Dean Rock free and Ciarán Kilkenny, who had been having an enthralling tussle with McHugh – which cut the margin to just two at the break, thinning Donegal’s biggest lead, five points, of the evening.

Cormac Costello made his first appearance of the season, replacing Dias, but again Declan Bonner’s team were quicker out of the traps and doubled the lead with points from Thompson and Peadar Mogan, who had forced another good save from Comerford before kicking over.

As has been the pattern, Dublin began to impose their rhythms on the match. Fenton recycled ball in the middle and ghosted in for two important points, Howard did another of those side-step and shoot scores and gradually Donegal were reeled in.

They weren’t a willing catch, though, and their sharpness up front kept the match alive all the way through the now familiar, protracted injury-time. By the end, just as Murphy was being announced as the man of the match, he was also getting sent off with his constant companion for the evening, John Small – both on a second yellow.

So, another tight league contest for Dublin but they remain unbeaten at the half-way point.