Resurgent Banner back in business 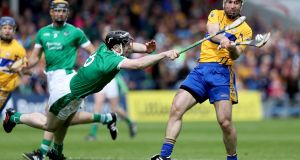 It was almost exactly as Clare would have wished. They survived the voodoo of this fixture with its alternating outcomes to post a second successive win over their neighbours.

In so doing they ticked a number of boxes, recording a first win in the Munster championship for four years, a sequence pre-dating the county’s 2013 All-Ireland and reaching a first provincial final since 2008.

Ultimately an inexperienced Limerick couldn’t overcome the handicap of missing key players but they battled hard throughout the 70 minutes and prevented the winners from running away with the contest.

Not that it was joy unconfined for Clare: the stuttering nature of the win, as they casually lost the initiative, particularly in the first half, must have been frustrating for the management team of Gerry O’Connor and Donal Maloney but when they focused on the task in hand they always looked too fast and too sharp for their opponents.

The best of their efforts came at either end of the field with David McInerney taking some great catches at full back and on the inside forward line, the restored Conor McGrath and Shane O’Donnell wrought havoc.

After the years of defensive systems there was a fluidity and flow to their attacking game but on occasions they were still well able to leave the attack stripped down to essentials.

And there will be an inquest into some of the defending that allowed Limerick back into the match just a little too easily and there was something unsettling about Tony Kelly’s fitful afternoon during which he didn’t get on the scoreboard and hammered a 68th penalty wide.

Joint-manager Donal Moloney paid tribute to Limerick veteran Séamus Hickey for the marking job but the 2013 Hurler of the Year wouldn’t be the first player to find it difficult to get back into the inter-county rhythm after an extended club season. But Clare will need him to get back to his best.

His chief lieutenant from four years ago Podge Collins has also had a mixed outing, showing some nice touches but it was all more fencing than thrusting.

Andrew Fahy in goal had a very jittery opening misdirecting and fumbling the ball in the early stages. He responded with a couple of good saves but distribution will want to improve in the future although he was by no means the only cause of the team’s struggle for possession at centrefield.

In a way Clare had to win it twice. A brisk start to the match came almost as the new management must have wished. Clever, uninhibited inter-play and ambitious scores, topped by two goals.

If anything was redolent of the summer of 2013 it was the goalscoring of a then teenage O’Donnell. Older now and you’d imagine wiser – he pointed out that it was just his second Munster championship win – after three years of coping with injuries on one hand and loss of form on the other.

He made an early impact here , haring in on a delivery from John Conlon that the Limerick defence failed to deal with and shooting first-time to the net. Nine minutes later, he got quickly to a ball, turned, left Mike Casey for dead and fired to the net. Within seconds he’d added a point and Clare were already on the high road.

David Reidy’s 20th minute free left the score-line at 2-5 to 0-3 and Limerick with no obvious way back into the match – in the sense that an unanswered 1-5 isn’t obvious.

The charge was led by Cian Lynch, who sprang into life after Peter Casey had registered the side’s first score from play. Firstly Lynch rifled a point, then he nipped in to snipe another in the loose play that followed a fine save by Andrew Fahy from Kyle Hayes. A minute later, a spring-heeled burst through the middle drew another save from Fahy but this time David Dempsey was on hand to drive the rebound to the net.

With the match spinning on an entirely new axis, Shane Dowling with a free and Paul Browne added points and suddenly the match was level, 2-5 to 1-8.

To Clare’s credit they ended the uprising before half-time with five straight points, featuring some pleasing touches like Kelly’s cross-field pass to Conor Cleary for his score, a solo effort from John Conlon and a second point for O’Donnell.

The second half was simply a tale of Limerick getting to within nearly touching distance only to see Clare speeding away. Two points on the restart from Dempsey and replacement Barry Nash were countered by a great relieving run and point from Conlon.

Yet it should have been a more commanding win. David Reidy’s frees went almost completely on the blink in the second half and he sent five frees – plus a shot from play – wide. Kelly should have had a goal when he performed a trademark spin away in possession in front of the goal only for Seán Finn to get in a terrific hook.

The respite was strictly temporary however and within a minute a poor clearance from Limerick found the hard working Colm Galvin in space and he launched a long, hanging deliver in on the square where the Clare full forwards were actually outnumbering the full backs and the ball bounced through to McGrath who flashed the ball to the net and opened a six point lead, 3-12 to 1-2.

What followed never looked likely to alter the outcome. There were a couple of encouraging contributions off the bench for Clare with Jason McCarthy and Ian Galvin posting some nice scores but there were also some daft wides, plus signs that Limerick were coming down with green-flag fever.

Kyle Hayes did battle in for a well-taken goal at the very end but it was just a gloss on the result.