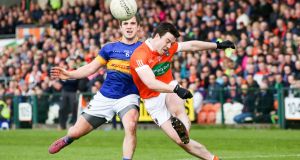 Armagh’s Aidan Forker in action against Tipperary’s Robbie Kiely during the league clash at the Athletic Grounds. Photograph: Philip Magowan/Presseye/Inpho 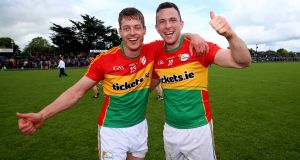 Carlow don’t have the stuff to compete here but there’s little enough disgrace in that when very few others do either. It will be interesting to see how Turlough O’Brien’s side go about this – he doesn’t seem the type to plant 15 men across the 45 and see if he can keep the margin under 20 points.

More likely, he will play to Carlow’s strengths – a heavy presence of leaders around the middle in the Murphys, Daniel St Ledger and Shane Redmond and an ace inside forward in Paul Broderick.

It will be tough for Broderick, after his 10 points against Wexford, to resist the temptation to get drawn away from goal in search of the ball. But if he can hang in there and Brendan Murphy can break even with Brian Fenton – again, no gimme for any midfielder, regardless of county – Carlow may feed enough ball into him to build something of a score.

For Dublin, the tension between relying on old heads and promoting new faces will be the driver of the early part of the season. If Jim Gavin is going to be using the likes of Con O’Callaghan, Colm Basquel or Ciarán Reddin in the autumn, you’d imagine we will see them here. Jonny Cooper’s return after missing the league would be welcomed by any travelling Jacks.

A step into the relative unknown for all concerned here, both inside and outside the whitewash. One of those games where no result can be ruled out and none should significantly surprise anyone.

Clare are favourites but it’s four years since they did anything in the championship that would intimidate anyone, least of all their near neighbours. Limerick have recorded ye-all-wrote-us-off wins against Tipperary, Cork and Clare in recent years so it would be folly to imagine they can’t do so again here.

John Kiely has overseen a big turnover of personnel through the winter – anything up to seven of the team that faced Clare last July won’t face the flag here. Diarmaid Byrnes is a major loss and if Gearóid Hegarty doesn’t make it, the gradient will likely get a bit too steep for Limerick.

For Clare, all the injuries have cleared up and only long-term absentee Conor Ryan is missing. While Tony Kelly and John Conlon will naturally force themselves on proceedings, the challenge for Clare remains getting Podge Collins, Shane O’Donnell and Conor McGrath involved to best effect. If the new management team has managed that, Clare could be a distance clear by the end.

They get the nod here but there is too much that remains a mystery to give it with any huge confidence.

Louth aren’t no-hopers here by any means. Meath improved a lot as the league went on but they’re still light enough on experience and it might not take a lot to cause a wobble in them. If Colin Kelly’s side have fixed their shooting issues – 16 wides against Wicklow left plenty of room for improvement – then they have the both the players and the momentum from the spring to guard against shrinking from the sight of the winning line.

Meath have lots of pace in their attack and the direct running of Graham Reilly, Eamonn Wallace and Cillian O’Sullivan ought to be their main route to goal. If Louth can clog up the roadways and make them think again, they should keep this close.

Ultimately though, Andy McEntee’s side will most likely restrict Louth to a score of around 0-14. Meath should have enough about them to better that, albeit probably by only two or three points.

Laois’s sudden flowering against Longford after a spring of stubborn growth-resistance took everyone by surprise. The question now is how real it is. Rattling in four goals in seven minutes is obviously a freak occurrence so this encounter with Kildare will be an exercise in finding their level.

Chances are, it’s still a fair bit below Kildare’s. Peter Creedon’s side will play in Division Four next year, Cian O’Neill’s will play in Division One. Neither of these things happened by accident. Kildare have been improving at a rate of knots, their league final non-display against Galway notwithstanding. If they weren’t Kildare and grim experience hadn’t taught you otherwise, you would be certain they were on the up-and-up.

They’re missing Neil Flynn and Ben McCormack through injury but should have enough in attack to compensate. If they hold down the Kingston brothers at the other end, they will surely come through with a bit to spare.

You know the Ulster Championship is off to a slow start when the commentariat start talking up Down v Armagh as the game to save the season. Down haven’t beaten Armagh in championship since 1992, a stretch of five straight defeats with an average losing margin of just over six points a game. No game between the sides has been decided by less than a goal since 1991.

Armagh look to have the stronger hand here. Down’s injury list is extensive, with Aidan Carr, Ryan Johnston, Jerome Johnston and Donal O’Hare all in various stages of recovery. Even if all four make it, they will be short of full fitness.

Armagh, by contrast, have a reasonably full deck to deal from. Kieran McGeeney’s sideline ban won’t worry them unduly and with Jamie Clarke, Andrew Murnin and Stefan Campbell in scoring form, Ulster might have to wait another week on a close game.