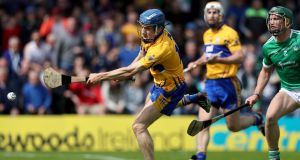 Fits and starts but Clare will take it. They’re through to their first Munster final since 2008 and you’ll have to dig long and hard to find anyone who’d argue they don’t deserve it. Brilliant performances from Shane O’Donnell, Conor McGrath and David Reidy saw them through a game that was sometimes stickier for them than it needed to be.

Limerick were only ever in with a shout here for a short, concentrated spell of the opening half. Otherwise, Clare always had them at arm’s length. Clare even got their scare at the right time – midway through that first half, when they had plenty of open water ahead of them yet and time to right the ship.

“The critical thing was that we got a performance,” said co-manager Gerry O’Connor. “It was one of those games where we were always one pass away from getting it right. We got some super goals and we probably missed some goal opportunities as well. The accuracy is something we will obviously have to work on.

“We knew there was pressure on here. Several times Limerick came back at us over the course of the 70 minutes but the important thing is we stood up to them and came back at them and saw it out. That’s what we’re most happy about.”

Clare did all the hurling in the first half. We’ll beg forgiveness for the cliché on the basis that it’s almost literally true. Limerick’s half-time tally of 1-8 was sourced more or less completely inside a six-minute purple patch from the 20th minute onwards. Up to then, they had scored just three points, all from placed balls. After it, they didn’t score at all until two minutes into the second half.

That brief spell of dominance from Limerick was predicated on two factors – a stiff wind at their backs and a nightmarish afternoon for Clare goalkeeper Andrew Fahy. Even when Clare were dominating on the scoreboard, Fahy was still having serious issues with his puck outs. Limerick just weren’t punishing him – 11 first-half wides tell their own story.

Clare were so much more clinical. O’Donnell took four shots in the opening half and went to his tea with 2-2 against his name. His first goal was a pure strike, pulled on first-time after Limerick goalkeeper Nickie Quaid batted out a high ball from John Conlon. His second was a merciless collect-and-turn all in one movement, leaving the Limerick cover for dead and finishing past Quaid in an eyeblink. It was ruthless stuff.

Added to a smart score from a rejuvenated Conor McGrath and a couple of David Reidy frees, it had Clare 2-5 to 0-3 ahead after 19 minutes. It was a cakewalk at this point, Clare tipping and tapping the ball around at will. They could even afford for Tony Kelly to have a quiet time of it, the star attacker barely involved. Conlon was carrying plenty of the load and O’Donnell was supplying the killshots.

But the Limerick growth spurt knocked them out of their ease for a bit. Fahy couldn’t get his puck-outs to a friendly hand and once in possession, Limerick rained down a cloudburst of points. Cian Lynch landed two, Peter Casey knifed one, Shane Dowling iced a free.

By the time David Dempsey swished home a rebound goal after Fahy saved a shot from Lynch, all the momentum was with Limerick. When Paul Browne stroked over a gorgeous long effort on 26 minutes, they were level all of a sudden, 1-8 to 2-5.

Game on, so? Not really. Clare took a deep breath, knuckled down and reeled off the last five points of the half. Conor Cleary, O’Donnell, Reidy, Conlon and McGrath just ticked and tocked Limerick to death. It left Clare 2-10 to 1-8 ahead at the break.

What it told you above all was that as long as Clare kept their minds on the job, they would most likely prevail. And so even when Limerick emerged to pop the first two points of the second half through Dempsey and substitute Barry Nash, Clare were barely ruffled. Conlon bore down to hoist his second phenomenal point of the day, McGrath pinged an assassin’s score from a tight angle. Limerick never cut the gap to less than a goal.

And then in the 50th minute, at a point when Limerick still only trailed by 2-12 to 1-12, they gave away the sealing goal to a ruinous lack of cover in front of their goal. A long ball into the Limerick square found two defenders and three attackers, with McGrath stealing in around the back. Everyone in the stadium could see him tiptoeing except the people who most needed to and by the time they realised he was there, he’d flicked a hopping ball past Quaid and Clare were out the gap.

Limerick stuck at it but they were never going to close a six-point gap from there to the finish line. A late Kyle Hayes goal put a gloss on the scoreline but in truth it was a comfortable outing for Clare.