Cork escape Waterford upset by the skin of their teeth 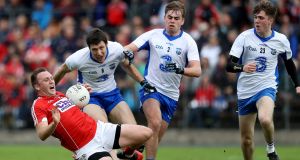 Cork came within a whisker of a first Senior Championship defeat at Waterford’s hands since 1960 on, frankly, one of the most dramatic football nights Fraher Field has ever hosted.

Waterford, who’d won only twice in Division Four of this year’s National Football League, set their stall out from the off on Saturday night, deploying 13 players, and at times 14, behind the ball, successfully nullifying Cork for most of the evening.

Ten minutes elapsed before another score was added, and how vital it ultimately proved, as Cork captain Paul Kerrigan bundled the ball over the line from point-blank range following Colm O’Neill’s jink down the standside flank, ducking inside James McGrath to palm the ball across goal.

Midfielder Michael Curry replied with a 22nd minute point before John O’Rourke again impressively found his range from an acute angle, wide on the right.

Aidan Trihy, a late call-up by manager Tom McGlinchey, finished off a fine move instigated by the hard-working Murray as the first half drifted into additional time before O’Rourke found his range brilliantly again. Paul Kerrigan landed an even later point for the visitors, who led by 1-4 to 0-4 at the break.

Moments after the restart, Waterford goalkeeper Stephen Enright dived brilliantly to his left to deny Colm O’Neill a goal and within four minutes his side devised a goal of their own, neatly finished by Gavin Crotty following great support play from Joey Veale.

Paul Kerrigan was sent through on goal in the 42nd minute by the hard working Peter Kelleher only to stab his shot wide, which served only to galvanise Waterford. Captain Paul Whyte, in the finest display of his inter-county career, sent Waterford ahead in the 43rd minute, with Breathnach doubling that lead seven minutes later. The home support dared to believe.

But Cork’s 2010 All-Ireland winners ultimately bailed them out, with substitute Donncha O’Connor landing three vital points before Kerrigan sent over the winning point in the sixth of seven additional minutes at the end of a thrilling night’s football.

Fellow Celtic Cross holder Alan O’Connor was dismissed in the 67th minute following a heavy challenge on Brian Looby, and James Loughrey was black carded in stoppage time as Waterford, inspired by Whyte and Breathnach, surged forward in search of a leveller.

A relieved Cork advance to a Munster semi-final against Tipperary, but it was a devastated Waterford who left the famed old venue with all the plaudits, despite defeat.