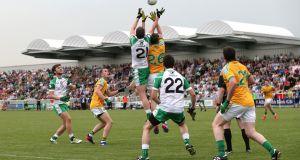 Tyrone legend Mulligan was a late inclusion in the London line-up and turned from poacher to provider, teeing up his team-mates for scores as they threatened a repeat of their 2013 Connacht Championship win over Leitrim.

Mulligan drew London level on 43 minutes and then played a central part in Liam Gavaghan’s go-ahead point, but the Exiles’ hopes were dashed by Kennedy, who came off the bench to score goals in three minutes.

“Threw away, threw it away,” said Mulligan. “We trained hard for this, we trained really hard. We are all gutted in there, the amount of hours and training we put in – you seen us hitting the post there and then they go down the field and score a goal. That’s championship football.

“We believed in ourselves today. I was only brought into the squad to help the forwards and then I end up having a crack myself and it was an honour for me to come out and play for London.

“You come over here and the bit of work, and you want to play a bit of football, and you are asked to come in at the highest level – of course you are going to, you are a GAA man.

“You seen it there, they might not have been good in the league but in championship that’s when they rise to it, when everyone is tested and judged, and the London team is no different.”

London were slow out of the traps but were still at level terms at the end of the first quarter, largely due to Leitrim’s profligacy.

But when Brendan Gallagher threaded a wonderful pass into the path of Darragh Rooney on 20 minutes and the corner-forward found the net, the dam looked set to burst.

However, Leitrim let their five-point lead slip as they went 16 minutes without a score and London hit six without reply.

Rory Mason blasted a shot over the bar on 46 minutes and hit the post moments later as London led by two, and a goal looked likely.

But it arrived at the other end as Kennedy twice punished naive defending. The Mohill man found the top corner with a precise shot and moments later he took a ball over the top and curled around the onrushing Gavin McEvoy.

London tried their utmost to mount a comeback, with Brendan Flynn parrying a Gavaghan shot, and although they made it a two-point game with six minutes remaining, Leitrim managed to hold on and book a semi-final date with neighbours Roscommon.