Kildare send out signal of intent with Laois hammering

Lilywhites were utterly dominant, recovering from a bad start at O’Connor Park 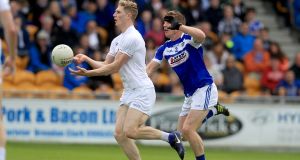 Daniel Flynn in action for Kildare against Laois on Sunday. Photograph: Inpho

Kildare eased past Laois in Tullamore on Sunday, to set up a Leinster semi-final clash with Meath, and send out a signal of intent that they are ready to mount a challenge to Dublin.

In the last 50 years of the Laois-Kildare rivalry, the counties have met 14 times with an almost 50-50 split of the honours: Laois with seven wins, Kildare with six and one draw.

But in recent times it has swung decisively in Kildare’s favour and on Sunday they underlined their dominance over their neighbours once again. The final margin was 14 points, which is their average winning margin across all their meetings over the last eight years.

They were utterly dominant, recovering from a bad start to control the game. All but three of their points came from play and 13 different players got on the scoresheet. A shot at Meath is their reward now - with a Leinster final the prize if they can get over that. And with that the hope that they can challenge the Dubs’ utter dominance of the province.

Daniel Flynn was the star man. The former AFL player was making his first Kildare start in the championship since 2013 and he finished with 1-3, all of it from play. The three points came in an impressive first-half showing and the goal, in the 47th minute, took with it whatever bit of mystery that remained in the contest.

When Kildare were winning promotion to Division One of the National League during the spring, Laois were slipping to Division Four.

Nevertheless Laois were impressive in their opening round win over Longford and while they came into the game as outsiders, they certainly weren’t no hopers given the calibre of players in their ranks.

And they got off to a dream start. With just a minute on the clock Evan O’Carroll fed Donie Kingston and the big full-forward broke through three Kildare tackles and finished well past Mark Donnellon.

But Kildare hit back swiftly and decisively. Kevin Feely landed a whopper of a free with the aid of a big breeze and Cathal McNally (two), Donnellon (‘45) had Kildare in the lead by the 11th minute.

Frees from Kingston and O’Carroll either side of the first of Flynn’s tally kept Laois in touch and it was level 1-2 to 0-5 after 22 minutes.

Kildare soon took over, however. Their ferocious tackling made Laois cough up possession regularly and they began lording it around midfield too. That dominance translated to the scoreboard as they hit six unanswered points to lead 0-12 to 1-2 at the break.

Kildare never looked threatened in the second half. Debutant David Slattery punched over and although Kingston replied with a free, Johnny Byrne, two from Niall Kelly and and a goal from Flynn, after being set up by Slattery, had the Laois supporters heading for the exits.

From there to the finish it was routine stuff for Kildare.

“Pleased with the performance overall, have to be pleased with that,” said Kildare manager Cian O’Neill afterwards.

“We struggled to get a stranglehold on the game in the first quarter. I thought they were bringing more to it . . . but once the players settled into the game plan we’re trying to execute I think we were in a stronger position going into second quarter. That’s when we took off.

“A lot of people were questioning where the scores were going to come from. We’ve a couple of injuries - missing Ben McCormack and Neil Flynn. But lads came and put their hand up, as they have done in training in the last couple of weeks. Everyone contributed in a huge way. That’s really pleasing.”

Laois manager Peter Creedon was frustrated that his team couldn’t build on their start; “We weren’t in a bad position after 20, 25 minutes, but Kildare kicked on with four points before half-time which put us on the back foot.

“Look, I’m disappointed for the players. We felt we had an opportunity here today and Kildare managed to put us away quite easily in the end.”