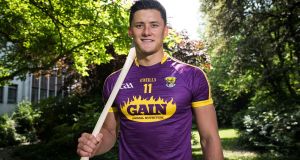 Wexford’s Lee Chin at the launch of the Global Games Development Fund at Iveagh House in Dublin on Wednesday. Photograph: Gary Carr/Inpho

Just because you don’t believe in ghosts doesn’t mean they don’t exist, and just because Davy Fitzgerald isn’t allowed manage the Wexford hurling team doesn’t mean he isn’t there.

“In terms of training, he’s there in spirit,” says Lee Chin, speaking ahead of Wexford’s Leinster quarter-final against Laois on Sunday. “Basically, he sees everything. We just can’t see him.”

Fitzgerald is serving that eight-week sideline ban for his on-pitch incursion in Wexford’s league defeat to Tipperary, which rules him out of all “GAA activity”.

Although that doesn’t mean he can’t exist: so he will attend Sunday’s game at O’Moore Park, having already bought his ticket for the stand, and will also be able to see off his team prior the game.

“We haven’t actually spoken about what our pre-match actions will be,” says Chin. “I presume he (Davy) will feature at some stage, before we head into the ground at Portlaoise. That’s the only bit of time we are going to get in his presence, maybe on the bus or maybe in the pre-match meal, something like that. Bar that, it is just going to be us in the dressingroom.

“But I know definitely he is still having his impact, with the contact that he has with the selectors. He is feeding stuff through to them and they are feeding stuff back to him after training. And we would obviously have all our training sessions filmed every night, so he is getting that feedback too, seeing himself what is going on.

“And a lot of contact on the mobile, and things like WhatsApp. I’ve sat down with him on a couple of occasions too, met in certain places. In some ways it is difficult, but at the same time Davy is making the most of it, doing what he can. We’re happy enough and his backroom team have picked up the reigns, and done a great job so far.”

Chin, speaking at the launch of the Global Games Development Fund at Iveagh House in Dublin, was equally adamant that Wexford are perfectly aware of the presence Laois will have on Sunday: they beat Westmeath, Meath and then Kerry in the Leinster round robin, under manager Eamonn Kelly, who previously managed Offaly and Kerry.

“The preparation that we’ve had coming into this Laois game has been crazy, and that’s no joke. Since we knew we got Laois, two weeks ago, we’ve been just totally focused on them. We know that Laois are going to come with a massive, massive fight. They’ll be very confident playing against Wexford, and in my time with Wexford so far, we’ve never played them in championship before. So, in a way it’s a new task, facing a new team, but we know what they’re going to bring.

“I have played them a few times in the league and challenge games and it’s always tight. They know us well and we know them well, and Laois are always confident when they come out to play us. We know what they’re going to bring, how hard they will fight.

“The point of contact is still there and Davy being Davy, he is still getting the best out of you. He is still motivating fellas and driving you on. And it is the same with the backroom team, Davy will be just as hard on those guys as he is with the players. He has them really working hard too.”

No complacency whatsoever, in other words. Wexford are also sweating a little over the fitness of Shaun Murphy, their sweeper, who injured his sternum recently though should be okay; goalkeeper Mark Fanning also suffered a broken finger recently and may not make it.

“Look, Shaun has been doing great for us, but again obviously we have backups. Davy wouldn’t let just one man settle on a position and have that guy there as a lone soldier. Any position on the field, we feel we have another guy to come in and do a job if needed.”

For Chin, now central to Wexford’s attack, Sunday’s game is described as a “must win”.

That potential semi-final date with Kilkenny is looming – it would also see Fitzgerald banned from the sideline – but there is the real sense no one in Wexford has looked past the Laois game.

“Yeah, of course, at the end of the day that’s everybody’s goal. Nobody goes out in the championship with the intention of getting beaten. It’s definitely not what we’re intending on doing at the weekend, we’re going out with the attitude of winning.”

1 How do Klopp’s Liverpool measure up against greats of past?
2 Saracens to accept second 35-point deduction and effective relegation
3 Welcome to Iten in Kenya – home of champions and cheats
4 James Ryan returns to the Leinster fold for Benetton clash
5 Johann van Graan makes two changes for Munster’s last stand
Real news has value SUBSCRIBE