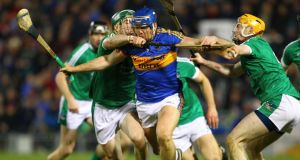 Tipperary’s Jason Forde tries to break through the challenges of Seán Finn and Richie English of Limerick during the Allianz Hurling League Division 1A semi-final at Semple Stadium. Photograph: Ken Sutton/Inpho

Jason Forde hit two crucial goals in the first period of extra-time as Tipperary edged past the stern challenge of Limerick to reach the final of the Allianz National Hurling League final after a thriller in Thurles.

The sides finished level at 0-26 each after normal time at Semple Stadium, with Limerick hitting four in a row to finish the game all square, but Forde hit the net in the 71st and 78th minutes to put Tipperary in control, and they easily held on to win despite Graeme Mulcahy’s fine goal three minutes from time.

Points from UL team-mates John McGrath and Forde had Michael Ryan’s side 0-2 to 0-0 ahead after three minutes, but despite an ankle injury, Aaron Gillane stepped up to get Limerick on the board with a fourth-minute free.

Ronan Maher converted a sideline cut from a huge distance after seven minutes, and at the other end Séamus Flanagan hit back, while a Gillane point from play was followed by a 65 from the same player to level matters after 16 minutes.

Four points in as many minutes put Tipperary in control as Barry Heffernan, Willie Connors and Micheál Breen all shot their opening scores.

But from there to the break the Limerick backs upped their performance. Diarmuid Byrnes and Dan Morrissey typified that effort in the half-back line, although the crude pull down from Richie English, which denied Forde a certain goal 10 minutes from the break was an ugly moment.

Ronan Maher pointed from distance nine minutes for the break to restore Tipperary’s four-point cushion, but some slick play from the Limerick forwards saw them pull level – the long crossfield passing from Gillane and Flanagan for Kyle Hayes’s point was a sight to behold.

But the Tipp forwards are hard to silence for long periods and they closed the half with points from Ronan Maher and Breen to lead by 0-12 to 0-10 at the interval.

Tipp continued to be efficient up front after the restart as two successful Forde frees stretched Tipp’s lead to four points, although points from Flanagan and Barry Murphy came for Limerick in a run of three without reply to maintain their challenge.

Both sides took turns to hold the upper hand and hit four unanswered points each, but John O’Dwyer and Seán Curran nudged Tipperary ahead with 12 minutes remaining.

Forde hit two wides in a minute, which encouraged Limerick, but McGrath pointed and Maher hit his second sideline cut to give Tipp a three-point lead.

Gillane finally succumbed to injury with nine minutes remaining, but Limerick battled to the end and hit five of the last six points to force extra-time as the game ended 0-26 each.

But Forde struck twice in the first period of extra-time to give Tipp a strong lead to protect, and even though Mulcahy found the net for the Treaty men there was no way back.