Down beat Tipperary but not the drop

Meath’s win against Louth sees them stay in Division Two 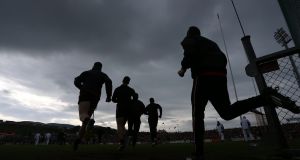 Sean Dornan’s early goal put Down on their way to victory against Tipperary but they still suffered relegation to Division 3 of the National Football League at Páirc Esler in Newry.

Despite Down’s win Meath secured a 1-12 to 0-7 win over Louth in the other re-fixed Division 2 tie which meant the Royals survived.

Down were 1-7 to 0-6 ahead at half-time and their second goal came courtesy of Donal O’Hare.

Dornan’s goal came after just 15 seconds but Tipperary retained their composure to draw level. Josh Keane, Kevin O’Halloran and Jack Kennedy all found their range by the 10th minute. Dornan added to his tally but O’Halloran levelled in the 16th minute.

Down scored four points in a row through O’Hare, Anthony Doherty and Conor Maginn (two). Michael Quinlivan scored his first point from a 45 in the 29th minute.

Tipperary had their goal 12 minutes after the resumption when Quinlivan scored, but O’Hare’s penalty in the 55th minute sealed the win.