Kevin Walsh rests some star players ahead of Division One final 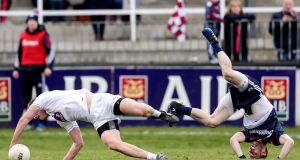 When these two teams met in the last game of Division Two 12 months ago, Kildare had a confident strut about themselves with a place in the league final confirmed with a game to spare. But a lot can change in a year and on Sunday in Newbridge they were beaten by a Galway side who rarely had to move into second gear.

The fortunes of the two teams since they were promoted into the top level of football could hardly be more contrasting. This win was Galway’s sixth of the season, while it was Kildare’s seventh loss in a row.

Cian O’Neill’s team looked completely bereft of any confidence while Galway look completely at ease with themselves. They have settled on a game plan that works for them and each man on the field knew exactly what they were supposed to do.

This was an ideal build-up for their league final against Dublin next week, a game they totally dominated from start to finish without have to overly exert themselves.

Kevin Walsh had the luxury of resting some of his star players and will be pleased that anybody who came into the team staked their claim for a place in the starting 15.

Patrick Sweeney kicked the opening two scores of the game and from there on, they had a stranglehold of proceedings.

Kerry native Eanna O’Connor, on his first start of the season, and Tommy Moolick briefly kicked Kildare level but that was the only time in the game that Galway weren’t ahead.

Eamon Brannigan and Seán Kelly caused Kildare all sorts of problems with their pacy running and although Galway led 0-8 to 0-5 at half time, their lead would have been greater had Kelly scored from the one goal chance in the half, but he shot wide from a great position after 17 minutes.

In the second half, Kildare had chances to put pressure on Galway but time and again their shot selection and then shot execution let them down. They ended with a total of 15 wides.

As Galway already began to turn their thoughts to Dublin, Kildare were able to cut their lead back to three with three minutes remaining but Galway always had another gear to move into and they scored the last three points to end their league campaign with their easiest win.