Cavan aiming to turn the tables on serial tormentors Roscommon 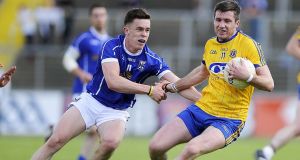 They gotta stop meeting like this. On the face of it, Cavan and Roscommon make for an unlikely pair to have their fortunes intertwined in any way and yet here they are again, catching each other’s eye across a crowded room and shrugging their way to another embrace.

Tomorrow’s Division Two league final will be their 14th meeting in league and championship since 2007. Much more of this and people will talk.

The two counties had some skirmishes back in the 1940s when they reeled off four All-Irelands in six years between them, besting one another occasionally along the road. But nothing as frequent as this.

For nine of the last 11 seasons, they’ve found themselves manacled together in the same division of the national league. In and of itself, that’s not terribly out of the ordinary – Dublin, Kerry and Mayo routinely see each other at least once every spring in Division One, ditto Wicklow, Leitrim and London in Division Four.

The difference with Cavan and Roscommon is that they keep running into each other in different divisions. If they’re both a couple of yo-yo teams – and they are – it’s as though they’re constantly attached to the same hand.

They’ve run into each other in every conceivable circumstance short of a Division One league final.

When they played a Division Two semi-final in Croke Park in 2007, it meant Cavan were the first county to get a run out in the new stadium since the rebuild. They came at each other at crossed purposes that day – Cavan as the best team in Division 2B, the Rossies as the second team in Division 2A.

From the following year onward, the leagues were restructured into the four streams we know today and for all but two of those seasons, Cavan and Roscommon have had an annual spring date. They’ve been promoted together three times and relegated together twice.

Next year will be their seventh year out of eight in the same division, spanning three seasons in Division Three, and two each in Divisions One and Two. They seemingly can’t quit each other, try as they might.

In fact, their respective league records since 2007 are almost identical. Taking group games only, Roscommon’s record reads: Played 85, Won 45, Lost 35, Drew 5 for an accumulated points total of 95. Cavan’s numbers across the same period read: Played 84, Won 42, Lost 35, Drew 8 for a points total of 90. Roscommon have made it to six knock-out games in the league in that time, winning three and losing three. Cavan have played three knock-out games and lost them all, including two to Roscommon.

And thereby hangs a tale, as the man said. For two teams whose paths intersect so often and whose various rises and falls are so parallel, theirs is a curiously one-sided rivalry.

Of those 13 games since 2007, Roscommon have won nine, lost three and drawn one. Both championship meetings have ended in heavy defeats for Cavan despite both of them taking place in Breffni Park. For one reason or another, Cavan almost never get it done against Roscommon.

If the modern iteration of the rivalry has a starting point, the All-Ireland U-21 semi-final of 2012 is as likely a place as any to begin. Both had won through fairly competitive provincial championships to get there, with Roscommon accounting for a Mayo side containing Cillian O’Connor and Evan Regan along the way and Cavan easing past a Tyrone team that had Niall Sludden, Connor McAlliskey and Darren McCurry on board.

With star-laden teams from Dublin and Cork on the other side of the draw, there was an All-Ireland final spot there to be grabbed when the sides met in Longford.

As would come to be the norm, Roscommon were better dressed when opportunity knocked. Cathal Compton and Conor Daly nicked a goal apiece, Ronan Stack, Niall Kilroy and Donie Smith were on the front foot throughout. It was one of those games where Cavan were never quite out of it but never quite in the mix either, Roscommon running out winners by 2-7 to 2-2 in the end.

It was the second of Cavan’s Ulster title-winning teams to fall in a semi-final and the first taste the likes of Killian Clarke, Jason McLoughlin and Conor Moynagh got of defeat at the Rossies’ hands.

And far from the last, at that. Year after year, clash after clash, Cavan have bent the knee. Gearóid McKiernan has played Roscommon eight times since 2013 and won only once, a 2014 league game where both sides had already qualified for the Division Three league final and for which John Evans made nine changes to his Roscommon team.

Tomorrow will be Dara McVeety’s fourth time facing them in a senior Cavan jersey; so far his average margin of defeat has been four points.

Not for any specific reason, either. That Division Three final in 2014 was a rip-roaring game that finished in a 1-17 to 0-18 win for Roscommon, Evans’s side overcoming a slow start and Cavan missing a penalty when 0-4 to 0-0 ahead in the first quarter.

By comparison, the qualifier in July of that year in Breffni Park was a dog of a game, with only five points scored in total in the first half and the Rossies easing to a facile 0-16 to 0-5 victory by putting up the first six in a row after the break.

Writing in the Anglo-Celt recently, former Cavan defender Mickey Hannon attempted to tease out an answer as to why his county has had such a rotten record in the fixture. In the end, he felt there was no real need to complicate matters.

“There have of course been exceptions but for the most part what we as Cavan people have unfortunately come to experience against the Rossies is a decent opening start from our boys before they seem to figure us out, turn the screw and go on to pip us at the end.

“During the [Terry] Hyland years this was routinely the case despite the fact that his side would usually turn up and throw everything bar the kitchen sink at the Rossies. I began to form the opinion that Roscommon simply had better players, not many, but enough to be making such a difference on a regular basis. In particular their forward line always seemed to have the edge when it came to kicking scores from play.”

McVeety and McKiernan are the leading lights of the Cavan forward line with most of the other spots up for grabs on any given day. In the Roscommon attack, Ciarán and Diarmuid Murtagh are exceptional on their day, ditto Enda and Donie Smith. Cathal Cregg and Ultan Harney are back on the scene, Niall Kilroy is still a danger. Roscommon just look to have more guns, plain and simple. Or more reliable ones, at any rate.

For Cavan, Caoimhín O’Reilly has had a promising campaign, Mackey and Seánie Johnston are still floating around doing their thing. And to their credit, they are the third highest scorers in the league across all four divisions. Problem is, Roscommon are second. (You can take a wild guess who’s top of the shop.)

Streaks end, of course, especially those that have the look of a coin flip that keeps coming up heads. So maybe tomorrow is when Cavan finally turn the tide and lift their first trophy since the 1997 Ulster title.

One way or another, this pair will meet again before long – possibly this summer but next spring at the latest. And the quirkiest little rivalry in Gaelic football will add another chapter, the pair of them bound up in each other whether they like it or not.