Under Jim Gavin, Dublin are the bear who delights in being poked 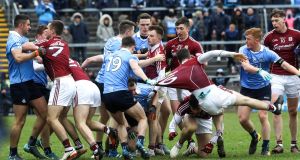 Galway obviously got under Dublin’s skin in the final league game at Salthill, sufficiently so for it to turn into a wrestling match down the stretch. Photograph: Lorraine O’Sullivan/Inpho

When the 2014 league came down to its final four, Dublin were left with a path to the title that was going to involve some debt collecting, if they were of a mind to do so.

The other three sides left at the semi-final stage were teams they hadn’t managed to beat in the regular group stage of that year’s league. First up were Cork, who had beaten them in Croke Park at the start of March. Get past them and either Derry (who’d beaten them) or Mayo (who’d drawn a thriller against them) would await in the final.

What followed was a couple of brutalising displays, shock and awe to the max. Cork actually stole a march in the semi-final and found themselves with a 10-point lead before the walls came tumbling down. Dublin ran out 2-20 to 2-13 winners in the end, leaving Cork looking at the end like they’d stepped off a waltzer that had spun out of control.

“We gave them a goal, gave them momentum and I would have felt after that we couldn’t get the ball past midfield,” said then Cork manager Brian Cuthbert on the day.

“We were kicking the ball back out to them, they were breaking it back forward and we were not picking up the breaks. It was wave after wave of attack, they had momentum, they could smell the chance that they had.”

As for Derry in the final, it was never a game. An early Cailean O’Boyle goal was their only score in the first 25 minutes, after which Dublin rattled off 10 scores in a row. Bernard Brogan, Kevin McManamon and Diarmuid Connolly stuck a goal apiece and Derry were cooked long before the end. Different day, different team, same payback.

“They are a really, really good side,” said Derry manager of the day Brian McIver. “I would like to think that if we had been much more like ourselves in the first half and had stayed with them then you would have got a much better idea of how good they were. Because to be honest, once they got that lead they were able to relax. We were not able to put them under any pressure today.”

All of which is to say that we ought not be too surprised if Galway find themselves on the end of a salutary manners-teaching exercise in tomorrow’s league final. Throughout Jim Gavin’s time in charge, Dublin have made a point of making a point against teams who manage to winkle out a result against them.

In Gavin’s first league campaign in 2013, an early defeat to Tyrone was righted in the final, albeit only by a point. Same again in 2015, with Cork on the receiving end this time – a two-point defeat in the group stage got its reply with a 1-21 to 2-7 torching in the final. Fool them once, shame on you. Fool them twice, shame on them.

Gavin has been in charge for 82 games in league and championship and under him the Dubs have lost just eight games, up to and including last weekend’s injury-time defeat to Monaghan. On all seven previous occasions, the defeat was avenged next time out, usually with interest. Take it that Monaghan’s card will be marked if the sides face off in the summer.

Perhaps Galway can possibly take a measure of succour from the fact that under Gavin, Dublin’s next-time-out record after games that ended level is somewhat less domineering.

They’ve had nine draws in those 82 games, up to and including Galway’s a fortnight ago in Salthill. Of the remaining eight, they only have three wins next time out along with two draws and two defeats (they have yet to come up against Donegal again after last year’s draw in the league).

Indeed, Kerry’s win in last year’s league final came after a draw in Tralee in mid-March. It may only have been by a point and Dean Rock may have had every chance to send the game into extra-time but it’s undeniable that Kerry got the measure of them in the draw on home turf and used that to full effect in the final.

What any of this means for Galway, only tomorrow can tell us. They obviously got under Dublin’s skin in the final league game, sufficiently so for it to turn into a wrestling match down the stretch.

Dublin’s homework since then will have been specific onto the day – Derry’s Mark Lynch got the full Jonny Cooper treatment in the rematch in 2014, so much so that he did well to keep the Dublin defender to a point. This will be a test for Galway’s up-and-comers, the like of which they haven’t experienced so far. And who knows? They may even be up to it.

But if history is a judge, Jim Gavin’s Dublin will welcome any and all opportunities to bare their teeth and remind Kevin Walsh’s upstarts of their place in the world. They are the bear who delights in being poked. Galway may just suffer the consequences here.

Wembley is the sole focus for Leicester and Aston Villa 22:30
Youthful Arsenal secure passage into FA Cup fifth round 22:29
Castleknock stand firm to repel Roscrea’s comeback 20:54
FA Cup draw: Man United could face Wayne Rooney’s Derby 20:05
Gary Lineker: ‘60 is just a number, 70 is the one to worry about’ 19:30
Crossword Get access to over 6,000 interactive crosswords