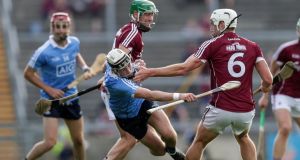 Dublin’s Jake Malone is tackled by David Burke and Gearóid McInerney of Galway during the Leinster SHC round-robin at Pearse Stadium in Salthill. Photograph: Laszlo Geczo/Inpho

Galway needed every one of Jason Flynn’s 11 points to shake off the challenge of Dublin in the Leinster hurling championship round-robin match at Pearse Stadium.

Two Paul Winters goals were not enough to edge victory for Pat Gilroy’s side as Galway now go on to face Kilkenny in the Leinster final on July 1st.

While Flynn hit the winner for his side, David Burke hit two late scores to help the All-Ireland champions to a fourth straight win of the summer.

Joseph Cooney wasted little time starting the scoring for the Tribesmen, and after Paul Ryan hit Dublin’s first point – he had already missed a free and was relieved of the duties before the break – Seán Loftus and Conor Whelan gave Galway a 0-3 to 0-1 lead by the sixth minute.

With Fintan McGibb impressive up front Dublin kept in touch with Ryan and Riain McBride on target, but the home side hit four in a row between the 15th and 20th minutes to take control.

While he didn’t score in the opening half, Niall Burke made an impact – he was one of four changes to the starting line-up – and it was his quick free in the 16th minute that gave Joseph Cooney and easy score for the Tribesmen.

Ryan and Danny Sutcliffe hit back to Dublin to trim the lead to three points, but with Ryan off target with a couple of frees, Galway hit four more points without reply to work their way into a 0-16 to 0-9 lead.

This game looked to be petering out into a straightforward Galway victory, but Dublin emerged for the second half with a real pep in their step. Points from a McBride sideline cut and Cian Boland were the perfect start, and when James Skehill missed a long delivery, half-time sub Winters squeezed the ball over the line from a tight angle.

Dublin still trailed by three points though, but by the 48th minute they were ahead.

Flynn’s free settled Galway after the goal, but they failed to make a further impact on the back of that score. Instead Gilroy’s side hit their second goal of the game and once more Galway looked suspect at the back.

It was Jake Malone’s long delivery into space that freed Winters, but when the Galway defence opened up in front of him he buried a blistering shot into the roof of Skehill’s net.

Still a point behind, it fell to goalkeeper Alan Nolan to give Dublin the lead with two long-range frees .

Robbie Brady nets as Burnley and Everton share the spoils 14:47
Fiji wrap up Covid-hit campaign with a win over Georgia 14:32
Antoine Rozner pips Andy Sullivan in Dubai smash and grab 12:54
Wallabies fall short as they draw with Argentina in the rain 11:38
Emiliano Grillo storms into the lead in Mexico 08:36
Crossword Get access to over 6,000 interactive crosswords