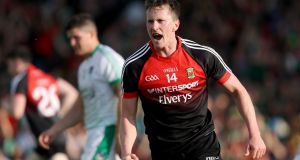 The sun was shining at the Gaelic Grounds this evening but it rained goals on Limerick, who exited the championship on a disappointing note. Cillian O’Connor finished with a hat-trick while Andy Moran came off the bench for Mayo to score goals of his own.

The one blemish for Mayo was the concession of two penalties, the second right at the death, and Limerick also scored a superb goal when a long ball from Danny Melville found substitute Seamus O’Carroll in behind the Mayo defence and he produced a stunning finish.

Mayo, who emptied their bench after the interval, ran the show in the second half with three goals coming in a space of just two minutes, O’Connor finishing the game with a personal tally of 3-9, 3-3 of which came from play.

Leading at half-time 1-10 to 1-1, Mayo had actually gone behind after just four minutes when a pull on a Limerick jersey by a Mayo defender gave Sean McSweeney the chance to score from the penalty spot and he made no mistake to fire past David Clarke.

By the 16th minute Mayo went into a lead they were never to lose as O’Connor got into his stride with three points on the bounce from play followed by a by a 45. And it was O’Connor who finished an excellent Mayo move on 30 minutes, Evan Regan setting him up for a close range finish.

James Durcan, who replaced Andy Moran in the starting line-up, Chris Barrett, Colm Boyle and Aidan O’Shea all found the target for Mayo in that first half.