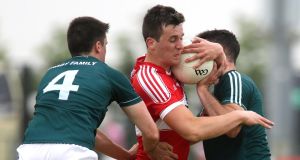 Kildare banished a year of footballing anguish and brought an end to a 12-game winless run by defeating Derry by 10 points at Owenbeg on Saturday. Goals from Niall Kelly and Daniel Flynn, alongside five points from substitute Neil Flynn, ensured that Cian O’Neill’s men progress to the second round two of the All-Ireland series.

Shane McGuigan opened the scoring for the home side, before Daniel Flynn and Fergal Conway edged O’Neill’s men into an early lead. But Derry came back and hit the net in the sixth minute, Sean Leo McGoldrick running at the heart of the Kildare defence before slipping the ball to McGuigan to inflict the damage.

The Leinster men needed a response and they got just that - Fergal Conway pointing before Daniel Flynn scored one of the finest individual goals you are likely to see, blasting into the roof of the net. Further scores from Paul Cribben and gave his side a three point lead before Pádraig Cassidy’s darting run created space for Enda Lynn who showed real composure to tap into the net. However, it was Kildare who led at the break on a scoreline of 1-12 to 2-7.

Kildare hit an unanswered 1-2 soon after the restart, culminating in Kevin Feely’s through ball finding Kelly who fired decisively home. The goal gave Kildare a 2-15 to 2-8 lead and the perfect cushion for the remainder of the game.