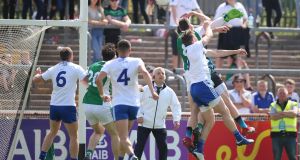 Two defences not so much packed as entrenched. More wides than scores. More frees than wides. And in the end, the favourites going home with their heads hanging and the underdogs getting chaired off the pitch. If it’s wrong, then try convincing Fermanagh of the worth of being right.

They’re through to only their sixth ever Ulster final and they deserved every bit of the result. Eoin Donnelly’s flicked goal in the 71st minute means the scoreline carries a burglar’s stamp but Monaghan can’t have too many complaints.

Malachy O’Rourke admitted afterwards that there had been a fair amount of loose talk in the county after the first-round victory over Tyrone and that try as they might to shield the players from it, some of that must have worked its way in.

Certainly Monaghan spent long periods of the game playing as if they knew the outcome would go their way in the end somehow. The patience they showed a fortnight ago in not panicking against Tyrone actually worked against them here. They were almost too deliberate at times and it kept Fermanagh in the game, even though Rory Gallagher’s side didn’t manage a point from play in the second half.

“We’re very happy with the way the game was played from our point of view,” said Gallagher. “We felt we had to try and control as much of the game as possible. We knew that Monaghan are a top-four, top-five side and we’re not coming from that level of competitiveness. We felt there was a small vulnerability with a high ball going into their square and Eoin was out in his feet so we stuck him in there.

“I’ve come across Monaghan a lot in the last six or seven years and always felt there’s that wee bit of indecision in there when the ball drops – usually from a mishit shot. And we’re lucky enough, that’s what happened.”

For Monaghan, this is a dismal outcome. It’s the third year in a row they have fallen in an Ulster semi-final, the second on the spin when they were heavy favourites. They took 18 minutes to get on the scoreboard at all, 32 minutes to register a point from play. They were better in the second half but not by enough to put the result beyond argument.

That Fermanagh were still in with a shout in injury-time is a tribute to their defensive system. It won’t win any style points but what it has done so far in 2018 is win promotion from Division Three and qualify for an Ulster final. This from a team that looked to be in crisis over the winter when the players moved to force Pete McGrath out. Whatever happens from here, a mature bunch of footballers who took responsibility for their own destiny deserve kudos.

They landed three splendid points from play in the first half through Aidan Breen (two) and Conall Jones, none of which Monaghan had any particularly clever answer to.

Conor McManus was on the periphery again for the favourites, chipping in with frees and not a whole lot more. Karl O’Connell made occasional headway to draw frees but that was the extent of Monaghan’s approach.

It all added up to a 0-6 to 0-4 lead for Fermanagh at the break. Monaghan’s only score from play was a fly-hack by Fintan Kelly after Kieran Hughes had caused some consternation in the Fermanagh square. It took until the 43rd minute for one of their forwards to score from play, Ryan McAnespie reducing the margin to one with a point on the break.

When Drew Wylie sallied forward to push Monaghan into a 0-7 to 0-6 lead on 59 minutes, it was reasonable to presume they would hold it to the end. Tomás Corrigan potted a fine free with his first involvement off the bench for Fermanagh but Colin Walshe and Wylie again seemed to have put Monaghan in the clear as injury-time dawned.

But then. A Ryan Jones shot dropped short in the Monaghan square, Donnelly got to it ahead of Rory Beggan and Vinny Corey and all of a sudden Fermanagh were a point ahead. There was time for McManus to attempt a rescue act at the other end but his last-ditch effort trailed wide.

“We thought coming in we’d been playing well,” said O’Rourke afterwards. “We felt there was a good hunger among the squad but it just didn’t happen for us on the day and it’s just very hard to take.

“When you’re a wee bit off like that, that extra bit of movement and energy, gaps aren’t as quick to appear so we found it hard to get space up there for a lot of the game. Towards the end we did and we went two points up. That makes it even more sickening to lose it at the end like that.”