Cats get the cream as Wexford run out of steam 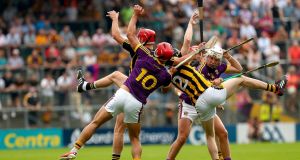 On a broiling night in Kilkenny, the Leinster Championship spoke up for itself at last. A rollicking encounter ended with Brian Cody’s side through to the final against Galway in three weeks’ time, as they came from nine points down to yet again have one to spare. Cody’s bench came through for him - he hooked Richie Hogan, Colin Fennelly and Conor O’Shea at half-time and saw his substitutes provide five points after the break.

In front of a buzzing 17,516 crowd, Kilkenny mixed some desperately ordinary hurling with that oh-so familiar refusal to be denied. When Paudie Foley - immense all through - and Lee Chin began the second half with a couple of Wexford points to push their lead out to nine, a comeback looked implausible. But led by TJ Reid and Pádraig Walsh, they nipped and tucked away at the lead and actually ran out handier winners than the one-point margin suggests.

For Wexford, this is no disaster. In the cold light of day it might even look like a close to ideal night’s work. They showed that they are every bit the equal of Kilkenny and would have zero fear of meeting them again. On top of which, they avoid Galway in three weeks’ time and instead will play either Westmeath or Carlow a month from now. They ran out of road here - a month’s rest and they will be dangerous opposition for anyone in July.

Because when they were fit here, they were flying. If Wexford were feeling the effects of playing for a fourth weekend in a row, don’t take too seriously anyone who says they know for sure what those effects were. For much of the night, the main one seemed to be a determination to make amends for their wan showing against Galway last Saturday. It certainly wasn’t exhaustion. They were much the sharper side, quicker to the ball and more adventurous with it.

All three of their inside forwards had points from play on the board inside the opening 10 minutes. Rory O’Connor was full of direct running and sweet striking, Lee Chin nailed a couple of phenomenal scores. After 25 minutes they had a 0-10 to 0-5 lead and Kilkenny had no answers.

The Wexford goal came soon after. Chin was a wrecking ball between centre-forward and full-forward and out of one of his intermittent stramashes, the ball popped out to David Dunne 35 metres out. The simple option would have been a snapshot over the bar but Dunne’s pick-up was so perfect - a delicate flick away from the cover and in front of himself - that he was immediately sprinting in on goal.

Instead of trying to beat the advancing Eoin Murphy, he drew him and slipped a pass across goal for Paul Morris to tap home. It was a cleverly stitched-together goal and felt like a statement of intent from Wexford. You don’t put a goal like that together if tiredness is dulling your senses.

Wexford led by 1-11 to 0-7 at half-time and when those points from Foley and Chin went over in the first three minutes after the restart, they looked like kicking on. But gradually, the weeks began to tell on their legs. In that scenario, TJ Reid’s frees are like weights being slipped into your backpack. He was merciless here as Wexford flagged.

The Kilkenny subs did their bit too. Richie Leahy popped up with a couple of points, John Donnelly came on late to throw two into the pot as well. Joey Holden even strode forward for a point, which nobody could remember happening before.

Solskjaer: Man United not taking last-16 place for granted 08:42
Andy Murray says ATP needs a domestic abuse policy 08:40
Fernandes the spark for Man United; Gordon D’Arcy says get the basics right 07:36
Envoi Allen the star attraction at Fairyhouse 07:45
Gordon D'Arcy: I know what Joe and Cheika would do. Fix the basics 06:00
Crossword Get access to over 6,000 interactive crosswords