Déise footballers put Tipperary thumping behind them at Wexford Park 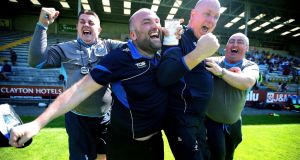 Waterford’s manager Tom McGlinchey and his backroom team celebrate at the final whistle after the qualifier win over Wexford at Innovate Wexford Park. Photograph: Bryan Keane/Inpho

It was a remarkable afternoon for Waterford at Wexford Park on Saturday as they claimed their first Qualifier victory since 2011 by shocking Wexford in this dramatic opening round match.

Wexford, who came into the game off the back of an extra-time defeat to Laois, were seeking to end dismal record of only a single victory from six league games and one championship. Waterford were demolished by Tipperary in their opening round Munster championship game, so it was a case of both sides trying to resurrect their season.

Wexford showed one change from their official side, handing an intercounty debut to Cork native and Gorey-based Garda, David Shannon, who took the place of the injured Paul Curtis in attack, while Waterford started with an unchanged side, as manager Tom McGlinchey tried to rebuild confidence following their demoralising championship exit.

Both sides started casually, playing most of their football around midfield, with the first score only coming in the sixth minute when Jason Curry pointed free for the visitors. After Donal Shanley and Conor Murray had exchanged points, it was Wexford who began to dictate the pace, resulting in three unanswered points through John Tubritt, a Shanley free and Eoghan Nolan to lead 0-5 to 0-2 after 13 minutes.

Waterford now began to burst strongly out of defence with lightning counter-attacks and it was centre back Shane Ryan who got on the end of a sweeping move involving five players to beat goalkeeper Conor Swaine in a one to one with a low shot to the corner of the net. Two minutes later Ryan should have had a second goal but he pulled his shot across the face of the goal and just outside the left post.

While Wexford battled their way back into the game, resulting in a Brian Malone point, 10 minutes before the break a great run from Waterford wing back Brian Looby set up JJ Hutchinson who sent a rising shot to the roof of the net, giving Waterford a 2-6 to 0-7 lead.

Curry then pointed a free, but it was Wexford who finished the half strongly, kicking three unanswered points, two from Ben Brosnan and a Shanley free; Waterford leading 2-7 to 0-10 at the interval.

Wexford needed an early second-half response but when a goal chance presented itself, Brosnan delayed his shot, which was blocked and eventually cleared to safety. Spurred on by this let off Waterford returned to the attack and it was Kieran Power who increased his side;s lead following a brilliant run out of defence by Murray.

With Wexford struggling it was Tommy Prendergast who took control in midfield and it was the result of his splendid run from deep in midfield that set up sub Joe Allen who blazed a tremendous shot low past Swaine leaving Waterford with a 3-8 to 0-11 lead after 45 minutes.

Tubritt and Shanley points kept Wexford in contention, but Murray, Hutchinson and Curry responded with three unanswered points to extend their side into a 3-13 to 0-15 led entering the closing eight minutes.

Wexford staged a dramatic late recovery in the six minutes of additional time, bringing an Eoghan Porter goal after an earlier Shanley effort had been disallowed for a square infringement, but the response came too late as the Déise county held out for a dramatic first Qualifiers victory since 2011.