Tyrone get out of jail as referee needs Garda escort 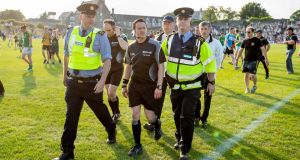 Referee Paddy Neilan is escorted off the field at the full time whistle. Photograph: Morgan Treacy/Inpho 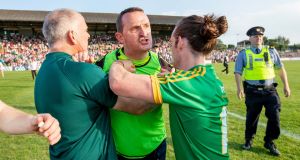 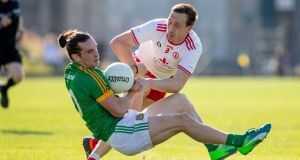 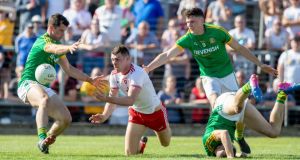 Last year’s All-Ireland semi-finalists Tyrone are still in the championship by the skin of their teeth after overcoming a stern Meath challenge in an absorbing qualifier that went to extra-time at Pairc Tailteann.

Referee Paddy Neilan had to receive a Garda escort at the end after turning away strong claims for a foul on Meath’s James McEntee seconds from the finish with the home side a point in arrears. The Meath management were incensed by the decision.

The sides had finished level 1-11 to 0-14 at the end of normal time with Tyrone seconds away from a shock exit before Cathal McShane kicked an equalising point almost a minute after the allotted five minutes of added time had been played.

It came from substitute Harry Loughran, who slapped to the net from a Ronan O’Neill pass. McShane and Niall Sludden added to the Tyrone tally and the Red Hand led 2-14 to 0-16 as the sides changed ends for the final time.

Meath made a bid to extend their stay in the championship in the final 10 minutes with points from Thomas O’Reilly, Shane Glynn and a Donal Lenihan free but their revival came up just short.

Tyrone had Tiernan McCann sent off for a straight red card offence following an off the ball incident involving Ben Brennan on 66 minutes. They trailed by a point at the time but got back level after Connor McAliskey converted a free.

However, Meath seemed to have snatched it following Ben Brennan’s free on 69 minutes.

Earlier the sides had been level on six occasions in the second half. Meath led for the first time when Brennan converted a free to put his side into a 0-12 to 1-8 lead and kicked his side ahead on two further occasions, the final time a minute from the end of normal time. The St Colmcille’s man soon turned from hero to villain though as he was dismissed on receipt of a second yellow card moments later.

McAliskey was outstanding in the opening half for the eventual winners, scoring 1-5 as his side led 1-6 to 0-7 at the break.

However, they should have been ahead by much more at that stage as a combination of poor finishing, the woodwork and Meath keeper Andy Colgan prevented further goals.

Solskjaer: Man United not taking last-16 place for granted 08:42
Andy Murray says ATP needs a domestic abuse policy 08:40
Fernandes the spark for Man United; Gordon D’Arcy says get the basics right 07:36
Envoi Allen the star attraction at Fairyhouse 07:45
Gordon D'Arcy: I know what Joe and Cheika would do. Fix the basics 06:00
Crossword Get access to over 6,000 interactive crosswords